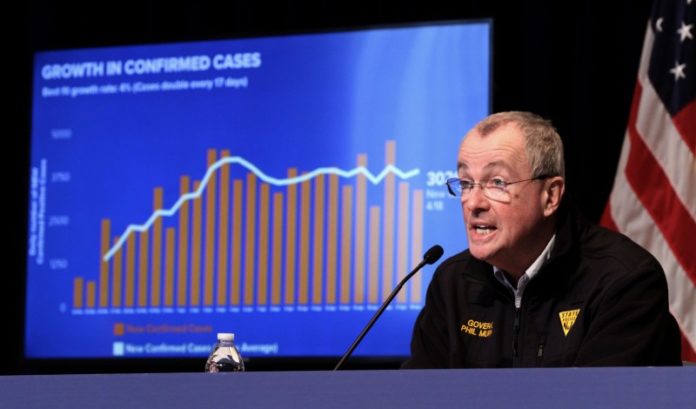 Three counties in New Jersey now have more than 10,000 confirmed COVID-19 cases — a milestone only 16 entire states have hit.

The good news: Gov. Phil Murphy said Saturday that the state’s efforts at social distancing are flattening the curve. 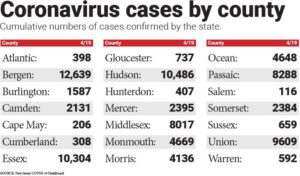 Murphy showed three charts that indicated a stabilization. The growth of cases, he said, is flattening, as is the daily rate of hospitalizations. More importantly, he said the number of hospital discharges is actually higher than the number of admissions for the first time.

“We are flattening the curve,” he said. “This is a credit to each and every one of you who has taken to heart our aggressive social distancing measures and who continues to do your part.”

Here are the hospital statistics, as of 10 p.m. Saturday night:

The number of COVID-19 fatalities remains steady. Another 132 fatalities were reported Sunday, bringing the state’s overall total to 4,202.

Murphy repeatedly points out that the number of fatalities is not necessarily a snapshot of the previous 24 hours, as each instance requires an investigation, which can lead to reporting lags — especially on the weekend. That being said, the state appears to be on track to hit 5,000 fatalities by the end of the week.

Murphy again asked for more volunteers to help the state. And he noted residents do not have to be health care workers to help.

“For those of you who simply want to start giving back to your community, please visit covid19.nj.gov/help, and we will help match you with opportunities near you — whether it be delivering meals to older residents or those with special needs, or helping to stock a local food pantry,” he said. “These are critical needs.”

Murphy did say more health care workers are needed, specifically saying the state needed respiratory therapists, physicians, nurses and paramedics. Those with such experience who want to help can go to covid19.nj.gov/volunteer to sign up.

Murphy said more than 22,000 health care workers who have volunteered so far.

“Ray’s reputation and experience in the industry are unparalleled,” NJ Transit CEO Kevin Corbett said in a statement. “The leadership and incredible wealth of railroad knowledge Ray brought with him has truly made a positive impact on our organization.”

Murphy on reopening the state: “There’s an absolute evident and natural pent-up desire to begin to get back to normal. That’s shared by everybody, including us, but we have to continue to make our decisions based on the facts and based on data and based on science. We have to have a plan.”

What if we find COVID vaccine … and people refuse to...