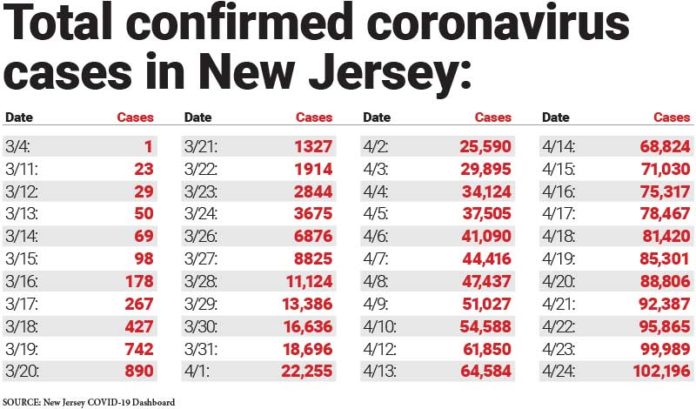 It’s a sobering statistic that everyone has known was coming for some time — but that doesn’t make its arrival any easier to take: New Jersey topped 100,000 COVID-19 cases Friday, Gov. Phil Murphy announced.

Of course, there’s another statistic that’s even more sobering: The number of fatalities in the state jumped to 5,617, with 253 fatalities announced Friday.

Perhaps more shocking is this: According to the Johns Hopkins tracking site, only six other countries have topped the 100,000 mark — though few believe China (88,000 cases) is reporting an accurate count.

Murphy reiterated his daily plea for the state to stay the course on social distancing, even noting Friday that the rate of doubling in some counties has increased — meaning it is taking a fewer number of days.

Murphy did his best to put a positive spin on the number.

“Even as we cross 100,000, we must keep in mind there are thousands and thousands of Jerseyans who have tested positive and have beaten COVID,” he said.

Health Commissioner Judith Persichilli said there has been a 17% decrease in hospitalizations from April 14 — which is looking more and more as the peak date in the state. Ventilator use is down 12% from April 14, too.

And there’s this: The number of negative tests is statistically even with positives. And, remember, New Jersey only tests folks believed to have the virus.

The climb to 100K has been steady — showing that the new cases in New Jersey are not necessarily dropping off, but they are not growing exponentially.

After the announcement of the first known case in New Jersey in March, it took nearly a month to reach 25,000 cases, which the state surpassed April 2. From there, it jumped to 50,000 and 75,000 in just seven days. The leap to 100,000 took eight days, though it must be noted the state was just 11 cases away going into Friday.

This stabilization has been a positive thing. Hospitals and health care facilities have not been overrun with patients. The FEMA-assisted field hospitals, quickly built because of this fear, have not necessarily been needed to this point.

The three facilities — in Secaucus, Edison and Atlantic City — combined to have just 91 patients Thursday.

Murphy, however, said the facilities are doing what they are intended — giving the state a backup plan should the number of COVID-19 cases quickly jump.

Earlier this week, Murphy warned that is a real concern.

“Here’s what we’re all worried about: It’s what if this thing comes back,” he said. “This is the sort of virus where the likelihood of it coming back is pretty high.”

Murphy said the state needs to have extra bed capacity, ventilators and health care workers on the ready.

“If we do it exactly right, we may need this down the road,” he said. “So, not only might we need this in the current surge, we may well need it in the fall or winter of next year. We want to make sure that we are as prepared as humanly possible.”

Until then, Murphy said the state needs to be vigilant in its social distancing.

“We cannot ease up one bit on our social distancing,” he said Thursday. “I am not in a position yet to begin reopening our state and jump-starting our economy. That’s still weeks away. We need to see more progress, and more slowing, before we can begin those considerations.”

The good news: The number of New Jerseyans who have survived after the recommended 14-day quarantine is on the rise, too.

As of Friday, that number is approximately 50,000.

BioNJ honors 21 innovator companies for 32 drug approvals at its...

‘Buster’ Soaries named to RWJBarnabas board