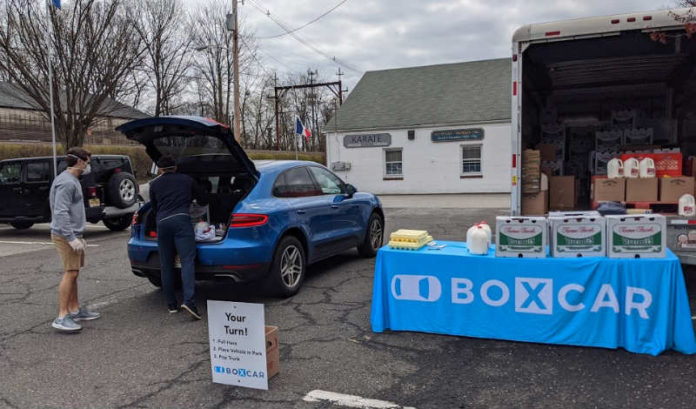 Drive-thru grocery shopping just became the bargain of the week for hundreds of New Jersey shoppers.

Boxcar, an app that typically leases unused parking spaces to commuters in less-traveled lots, has converted those areas into a convenient drive-thru system where preordered boxes of produce and protein are delivered in contactless manner to the trunk of cars in a matter of minutes.

Joe Colangelo, founder and CEO, learned from a high school friend who operates Gargiulo Produce in Hillside that much of the fresh vegetables and milk would go to waste because of a breakdown in the supply chain between farmers, dairies and commercial purchasers as a result of COVID-19 and shelter-in-place policies.

Through the Boxcar app, customers reserve and pay for a $58 box of food that is available at scheduled pickup times and locations such as Cranford, Madison and Millburn. Dates are forthcoming in Ramsey and Mercer County.

Families reserve a one-hour time block, line up and drive through. Chatham-based Boxcar’s employees confirm the vehicle based on type, model, color and license plate, ask the driver to pop the trunk, then place the box inside. The lines move efficiently; Colangelo said no one waits in line for more than seven minutes.

The service has doubled in volume for three weeks in a row, starting with 50 boxes in Week 1, to 100 and then to 200. Colangelo expects continued growth in the coming weeks and will continue to operate his service and expand locations through the pandemic.

Repeat customers are the norm, and word of mouth helps grow interest.

“Maybe the first time this is offered in a town, some people are skeptical,” he said. “But, once they hear it from their neighbors, they want in, too.”

Each “Boxcar Basics” box is designed to feed a family of four for a week. It includes a gallon of milk, a carton of eggs, 5 pounds of potatoes, 5 pounds of tomatoes, three heads of lettuce, an avocado, blueberries, green peppers and bananas.

“Just a few weeks ago, I heard people saying that they had trouble getting an order from Amazon Fresh, PeaPod or Instacart, and I wanted to fill that gap,” Colangelo said. “Because of pandemic restrictions, produce right now has an imbalance in supply and demand. I heard about farms in Arizona and California that were not going to harvest their vegetables and dairy farmers who were going to pour the milk they produced down the drain because there was no one to buy it.”

(A huge deficit comes from the lack of orders by restaurants, hotels and school systems.)

Colangelo said his method is cheaper and easier and more efficient for the buyers and sellers.

“You order it and it will be there, guaranteed,” Colangelo said. “There’s no hoping the store has it on the shelf.”

Colangelo forecasts he’ll sell 1,000 boxes next week. He said he’s not in competition with other grocery delivery services.

“The big guys will deliver more in an hour than we do in a week,” he said. “If you look at a town like Cranford, there are 8,000 homes. If we deliver 300 boxes, then we are helping that community. But we’re not looking to compete on a grand scale.”

Colangelo said this pivot from parking to grocery sales is keeping the Boxcar app in business and his workers employed.

“Even though people aren’t commuting right now because of COVID-19, I don’t have to lay anyone off,” he said. “My employees’ work is just a little different than it was when they were checking cars into lots.”

He said these difficult times are what will make or break a business’s reputation for the next 20 years.

“People will remember how you reached out to them in their time of need,” he said. “My goal is not to take advantage of the situation financially, but to gain the favor of our customers, because I plan to run the parking space aspect of my business for the next 20 years.”

Depending on the town, the drop-off points are at churches, commuter lots, libraries and even a local swimming pool.

“None of those are being used for parked cars right now,” he said.

There is no a la carte shopping, which creates the greatest efficiency for the food provider. Colangelo has continued to expand his menu. In Week 2, he added a $40 protein option of 2 pounds of hamburger, 2 pounds of chicken, 1 pound of Italian sausage and 1 pound of bacon. It sold out in 22 minutes.

For the meats, he partnered with Green Village Packing Co. in Green Village: “Our boxes brought him $3,000 in business (Boxcar keeps no more than 25% of the revenue.) And, this way, these were guaranteed orders and easy for him to pack up. Otherwise, to do that amount of business, he would have had to have 100 or more customers enter his store and individually choose what meats they wanted.”

He’s also partnered with local pizza shops Romanelli’s in Madison, Sal’s Pizza Corner in Ramsey and Calabria in Cranford, each assembling an $11 box with dough, cheese and toppings so families can prepare it themselves at home. The locations offered to do 250 pizzas — and, each time, they sold out.

So, you could say, grocery deliveries now are as easy as pie.