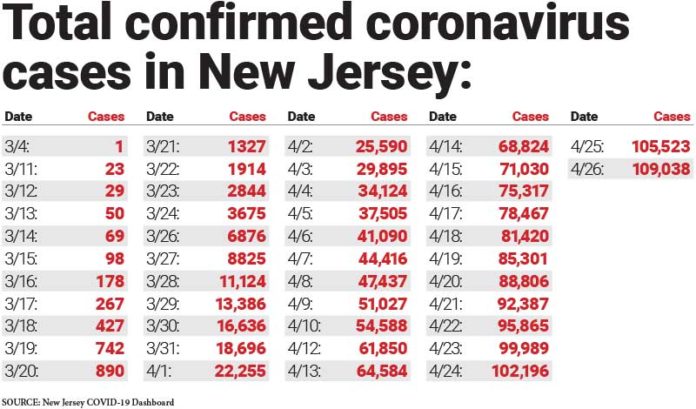 Gov. Phil Murphy said Sunday it’s still too early to discuss when New Jersey will reopen in any way — saying we’re likely “a number of weeks” away from doing so. But, when it happens, Murphy said the state likely will have uniform rules for all.

Murphy, speaking on “Meet the Press” on NBC on Sunday morning, told Chuck Todd there are good signs — noting hospital admissions are going down, as is the use of ventilators — but that the state still has a ways to go before it puts any reopening rules in effect.

“The best understanding of the data now is that we are still a number of weeks away,” he said.

Murphy acknowledged North Jersey has been hit harder than Central and South Jersey, but he said the state likely will move ahead as one.

“I suspect, while we haven’t made a decision on that, we’re going to move as one state, recognizing that you’ve got density issues in the north that you just don’t have in the south.”

On Saturday, during his daily briefing, Murphy was optimistic — but reiterated the need to stay the course.

“As we look at the curve of new COVID-19 cases, we see continued flattening,” he said. “We cannot ease up one bit on our social distancing.

“We need to see more progress, and more slowing, before we can begin implementing any effort to get ourselves on the road to the new normal that awaits our state on the other side of this pandemic.

“Notably, if you look at the three-day average, we still see discharges exceeding admittances. This is an important measure for hospital readiness, and the availability of beds for those who need them.” 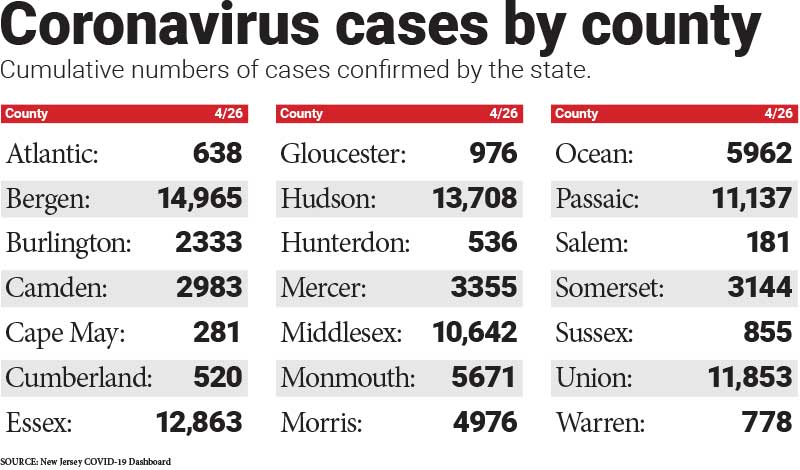 The state, on its COVID-19 website, announced Sunday that there were 3,730 more cases, bringing the state total to 109,038. That follows the announcement of 3,457 more cases Saturday.

The state also announced there were 75 additional deaths, bringing the state total to 5,938. That number likely is over 6,000 — as weekend numbers often are underreported. Murphy announced 249 fatalities Saturday.

It’s worth noting that the state now has six counties with more than 10,000 cases, as Middlesex eclipsed that number this weekend:

It’s worth noting that Bergen’s total is higher than all but 15 states (including New Jersey) and that seven states (Maine, North Dakota, Vermont, Hawaii, Wyoming, Montana and Alaska) all have fewer than 1,000 cases, according to the CNN state-by-state tracker.

Murphy said he has had good discussions with federal leaders about expanding the use of COVID funding for the state.

“They have been somewhere between open and receptive, but we’re still going to have a ‘Where’s the Beef’ moment until this actually gets across the goal line,” he said Saturday.

Health Commissioner Judith Persichilli said the state has been in contact with the health minister in Germany to discuss reopening initiatives, saying she’s hoping Germany’s experience can help ours.

Murphy on inevitability that state will have to borrow large amounts of money — which goes against his principles, he said:

“If you go right up to the front end of the coronavirus crisis in New Jersey, I’m incredibly proud of the fact that we had increased our surpluses two years in a row. We put a budget up for a third, increased (our) rainy day fund, we were able to clip our outstanding indebtedness, we had made historic pension payments. We were going in the right direction, (but), as Mike Tyson will remind us, ‘Everyone’s got a plan until you get punched in the face’ — and we’ve been punched in the face.

“I’m a guy who wants to reduce indebtedness, not increase it, but I don’t I see any scenario where we get out of this without having to borrow a meaningful amount of money. I just don’t see it.”

HMH’s Garrett to be honored with Corporate Lifetime Achievement Award by...