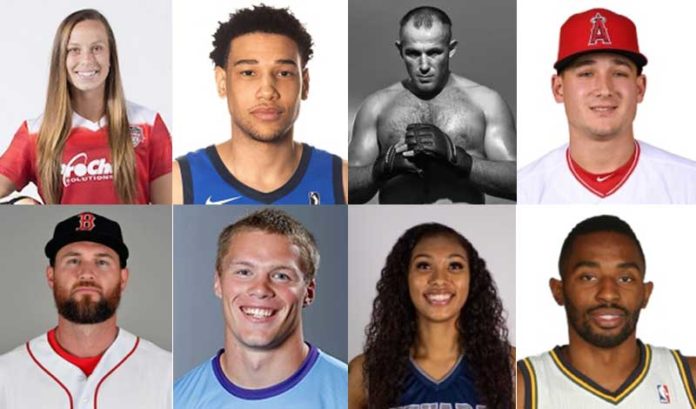 The diversity of clients the agency represents is worth noting. And it’s not just having basketball, baseball and soccer stars along with mixed martial arts competitors. Or a Ukranian actress, bilingual Hispanic TV personality from Colombia and a voice-over specialist from Florida.

No, it’s the total mixture of sports and entertainment that makes Warren-based IPZ different, founder and Managing Partner Bob Zito said. And he said he wouldn’t have it any other way.

Zito learned the power of diversity during has decades of experience marketing athletes and entertainers from his time in top management roles at Sony and Bristol-Myers Squibb (where he fired Lance Armstrong before the scandal came out) and the New York Stock Exchange (where he not only brought TV to the trading floor, he started the policy of having companies — and their famous spokespeople — ring the bell).

“I learned the power of personality at the New York Stock Exchange,” he said. “Companies would bring their spokespeople, so it was Sarah Jessica Parker if it was HBO or Terry Bradshaw if it was News Corp.”

Zito didn’t forget those lessons when he left the corporate world in 2010 to start Zito Partners, a corporate brand consulting firm.

In 2016, he took a leap. He started representing celebrities, helping them get the type of work he used to hire them to do.

“Sports and entertainment have been a part of everything I’ve ever done,” he said. “I started my career as a sportswriter. Becoming an agency was just a natural extension of all that. And when the opportunity presented itself to Zito Partners, we decided to go for it.”

The COVID-19 crisis obviously has limited the work his clients can do. But it hasn’t stopped IPZ from adding clients. Earlier this month, it signed basketball player Pat Andree, a former North Carolina State basketball player who likely is headed overseas to play professionally — whenever the sports world is allowed to reopen.

Zito recently talked with ROI-NJ about his firm — and about being a sports and entertainment agent in a time when everything is shut down around the globe because of COVID-19.

The interview was edited for space and clarity.

ROI-NJ: Talk a little more about how you used personalities in your previous stops, when you were a vice president in communications and marketing roles at Bristol-Myers Squibb, Sony and the New York Stock Exchange.

Bob Zito: The best example would be the stock exchange. We knew we needed to bring personalities to get attention when we brought television to the floor. So, we would have companies use their spokespeople when they rang the bell.

During the Millennial Bell Series, we had everyone from Muhammad Ali to Bishop Desmond Tutu, Walter Cronkite, John Updike and Elie Wiesel. We had people from every walks of life. It was phenomenal.

And, when we reopened after 9/11, we had firefighters, police officers and government leaders, including Chuck Schumer, Treasury Secretary Paul O’Neill, Mayor (Rudy) Giuliani, Gov. (George) Pataki and Hillary Clinton.

ROI: Tell us more about Armstrong, who you used as a spokesperson at Bristol-Myers?

BZ: Lance was the face of the company for a while, and then I didn’t renew him. I ended our relationship with Lance because there was too much smoke at the time about what Lance may have done in terms of performance enhancing drugs. I felt with what Lance and his agent wanted financially for an agreement we could use better with different actors and actresses.

BZ: The first athletes we represented were recent college grads who played basketball overseas.  It happened thanks to an introduction from our banker at UBS, a friend, to an agency he knew from Italy that was looking for a U.S. representative.

ROI: Let’s talk about the life of an agent during the COVID-19 crisis. Everyone is on the sideline — give us some examples of how they are being impacted?

BZ:  Alexey Oleynik is a UFC heavyweight we represent. He is fighting in UFC 249, which has been rescheduled twice, but now appears to be on for May 9 in Jacksonville — without fans. Alexey is training, but training differently because of social distancing. It’s difficult. If they can get it to happen, it’s going to be one of their biggest cards ever. He has to stay ready.

One of our actors, former WWE wrestler Oleg Prudius, is now waiting for a film production to start again in Florida. He’s two weeks away from finishing a new movie, “Miami Heat.”

ROI: You recently signed Andree, the former N.C. State basketball player who is the all-time leading scorer at Christian Brothers Academy in Lincroft. He likely would start a pro career oversees. How do you make that happen during the COVID lockdown?

BZ: It puts him a difficult position, because this is a time when your European clubs would be sending people over to scout the U.S. talent. And they can’t do it. So, now, they’re just relying on game tapes — and they want to see full game tapes.

That’s a scenario where a guy like Pat is really going to excel, because he’s always been a good teammate. So, our guys in Europe will be able to call coaches and tell them Pat is type of player they are looking for — and the coaches will trust us, because they know we’re not just someone selling a number. That’s important.

ROI: It’s interesting that you mention personal relationships. Being an agent can be a shady game. How do you stay above that when it comes to getting clients?

BZ: I think the reason an athlete would come to us is because we don’t have a huge shop. They know they’re going to get personal attention with us. I’m serious. We really look at anyone we work with as part of our family. And we go through walls for them.

Jeff Curtin, our managing director, was a professional soccer player and was a client of the largest soccer agency in the country. At the time, they represented 65 soccer players. And he was not No. 1, 2 or 3. So, getting on the phone with the agent was a struggle, because they were too busy trying to cut deals for the guys that were No. 1, 2 and 3.

We’re never going to have more than four or five people at any one sport — we just won’t do it. We think, at that point, you kind of lose track of who’s who.

We have a full-time staff of three people: Yours truly, Jeff and Emily Clayton, our client sponsorships manager. We use contractors to negotiate contracts. But Jeff, Emily and I are involved with each of our clients.

ROI: And these are clients who come from all over the world —specifically, a number from the Ukraine, Belarus and Russia. You have basketball players in China and Japan. How did you become so global?

BZ: Tony Dutt is the basketball agent we contract with. Tony is the longest-tenured NBA agent, having started with Karl Malone. He has connections around the world. And the guys we rely on for guidance in Italy, Roberto Carmenati and Massimo Raseni, are two of the most respected in all of Europe.

ROI: Let’s close by taking it back to Jersey. Andree is from here. As is Chris Silva, the Roselle Catholic grad who plays for the Miami Heat. Do you make an effort to get the local athletes and celebrities?

BZ: Not necessarily, but the New Jersey high school community knows us and trusts us. We have former St. Anthony coach Bob Hurley on our board, so that helps. He’s phenomenal. And he speaks to our credibility. When a person comes out of Jersey, whether it’s basketball, football or soccer, and they go back to their high school coach about agents, those coaches may say, ‘Why don’t you talk with IPZ?

That’s how we really have gotten the great majority of our clients. It’s because people know that we’re going to do everything we can to help that individual as opposed to just negotiate a contract for someone. Everyone is family.