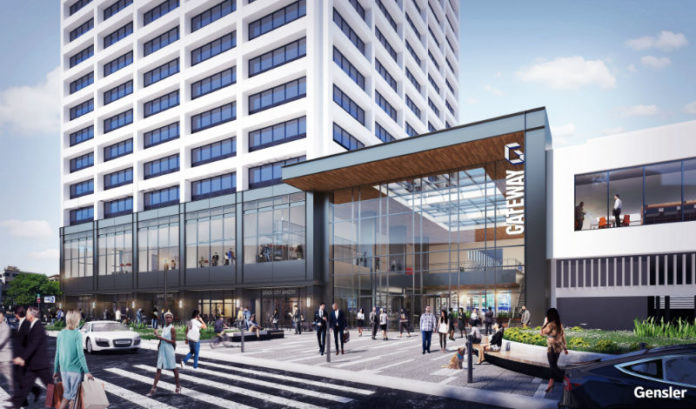 Adjustments will need to be made: Perhaps one-way, east-west lanes running through the concourse and more of an emphasis on takeout food from the variety of food offerings. The open-space gathering spaces made for collaboration? They aren’t eliminated, they’ll just be adjusted for the times.

John Saraceno, the co-managing partner of Onyx Equities, only knows one thing for certain: The massive, transformational renovation of the concourse that connects the Gateway buildings in Newark to Penn Station and the city streets is moving forward.

“Our intention is not to stop it in any way,” he told ROI-NJ. “We’re as committed as we’ve ever been.

“We’ll probably look at it from a phasing perspective — maybe do some other things first, relative to ventilation, monitoring and security issues. Some things need to change from a chronological perspective, but, the overall project, we’re still committed to. We think it’s the right project.”

To be sure, the project has been delayed. The virtual shutdown of the city has brought the permitting process to a halt as well as many construction projects.

When Saraceno and co-Managing Partner Jonathan Schultz announced the multimillion-dollar renovation project last December, the hope was to begin work this spring and be done in nine months. Saraceno’s best estimate is that the project will begin this fall — and will now take a year to complete, due to various impacts of the COVID-19 crisis. He thinks the fall of 2021 is now a more realistic target date.

Since acquiring three of the four Gateway buildings for $300 million in December 2018, Onyx said its goal was to turn the complex into a hub of business and cultural activity. Working with Gensler, Onyx is planning a revamp of both the skyways connecting the buildings and the lobbies.

Most important was the concourse project, which will feature street-facing retail space for the first time (about 10,000 square feet is planned) in an area updated to include local and international dining options, among other amenities. The goal was to connect the buildings to the city, especially the nearby Newark Ironside building, which borders Mulberry Commons, a park that connects to the Prudential Center.

All of this, Saraceno said, is still possible — and still wanted.

“This is clearly a moment in time where the urban density issue is going to be talked about,” he said. “And I think it will affect some occupants. But I think there’s still a desire to be in the city.

“I think what we need to do is take what we offer, which is walkability, the ability to be indoor/outdoor, the dynamics of unique foods and amenities — and then try and marry that to the desire to be safe. And I don’t think they’re exclusive of each other.

“I just think that you have to take a look at them a little bit differently now. We need to keep safety in mind at all times and be sensitive to it as we design the concourse. But no one will ever convince me that people don’t want more amenities.”

And Saraceno has seen no evidence that companies do not want to be in urban areas.

“We haven’t received a lot of calls of people wanting to come, but I don’t think there’s a lot of activity right now,” he said. “The brokers I talk to — and I talk to all of them — say that no one in companies that were planning to come to Newark or Jersey City or an urban environment is now saying, ‘We don’t want to go into an urban environment.’”

The same holds true for the current tenants, Saraceno said.

“I have not received, nor has anybody in my organization received, a phone call from an existing tenant saying, ‘We’re out of here,’ like after 9/11,” he said.

Last week, Onyx announced the law firm McCarter & English LLP had signed a 10-year extension to the 117,300-square-foot space it has had in Gateway Four for decades.

And, while Saraceno acknowledges many companies are having a financial crunch due to the COVID-19 crisis, he has not seen evidence of that in rent collection. Saraceno said the company collected more than 94% of its rents in April, which he said is standard during normal times, exceptional now.

He knows that may change in the coming months — he estimates the number will drop to 90% in May — but he said he’s more than open to working with tenants that are struggling.

Saraceno said that, if tenants are willing to be transparent about their issues — willing to open up the books — Onyx will be willing to work with them.

“The great thing for us so far is we’ve never been securitized borrowers, we’ve always been relationship-oriented borrowers,” he said. “So, all of our debt is with commercial banks who have been enormously helpful and understanding of this the same time.”

Schultz feels the temporary shutdown of the city — and the project — came at a time that ultimately will benefit the project.

When the project is completed, he said, it figures to be one of the first that has been developed with new safety and distancing concerns in mind.

“There are all sorts of technologies that are available — and have been available — that developers can look at and need to look at,” he said. “The timing makes it easier to think through these issues. I know lots of people that were well on their way on projects and that makes it harder to adjust.”

Saraceno said he is hopeful that Gov. Phil Murphy will reopen the state at the end of May or in June. When he does, he said Onyx is preparing for all possibilities.

“From the day we left, on March 14, we’ve been working on, ‘How do we get back?’” he said. “What is it going to be like, what technologies are available to us.”

The company, he said, is trying to figure out if fever testing is possible — and if it is feasible to hand out masks or gloves. There’s one thing he knows will happen: The concourse will only be open to tenants and visitors of tenants.

“It will not be walk-through to anybody and everybody in the city, until we can get to a point where we can open up more generally,” he said. “We’re going to have to adapt and we’re going to be sensitive to it. And we want to be. I’m a tenant in the building, too. I’m going to be there every day.

“I’m fully aware of what I think we need to do. And I think people generally will adapt to make it as safe a place as we can make it.”

Read more from ROI-NJ on Onyx and Gateway: