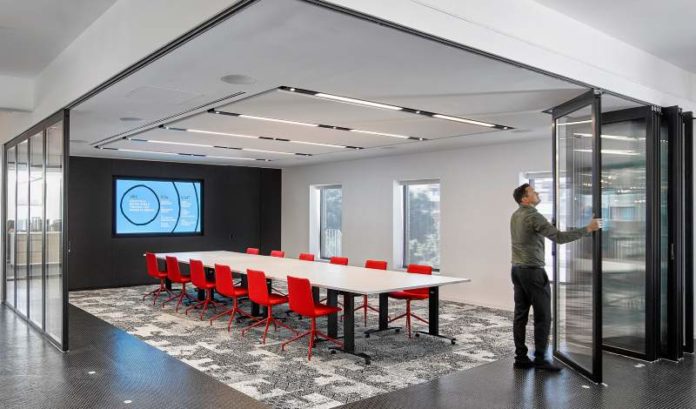 Where once there were eco-friendly LEED certificates hanging on the walls of a good office building … there may soon be certificates promoting proper social distancing measures.

Formal recognition for offices taking the COVID-19 pandemic seriously is not far-flung for those tasked with conceiving of workspaces in a new reality for the commercial real estate sector. They’re pitching it themselves, because no one in the industry considers it a passing phase.

The world’s leading commercial real estate companies have already had to do a lot of thinking about how to bring workplaces safely back online in communities devastated by the spread of COVID-19. In the trial-run work that those companies did in China and other countries that have started easing restrictions, keeping everyone at least 6 feet apart has become the golden rule.

One of the companies piloting these efforts is Cushman & Wakefield, which has helped 10,000 Chinese organizations — amounting to a total of nearly 1 million individuals — as they return to their workplaces after China’s government began to ease lockdown mandates in the past month. Cushman & Wakefield manages more office buildings in China than anyone, with a combined 800 million square feet of space there.

“But, as much as we’ve learned, everything’s still very fluid,” he said. “We’re now taking some of the guidelines that worked in China and tweaking them to meet the nuances of other locations.”

A major reevaluation of office spaces around the world sounds like an expensive proposition. It doesn’t have to be, Judd said.

There’s an awareness among commercial real estate firms that their clients and businesses generally are sometimes struggling to achieve the same revenue as they were prior to the pandemic.

In light of that, Judd said some of the current advice for companies considering immediate, no-cost changes to the office environment include visual indicators of 6-foot distances between workstations and a rearranging of the furniture in common areas such as break rooms. Some of those common areas may have to be rethought or temporarily eliminated, he suggested.

In general, Judd doesn’t believe businesses should have to worry about significantly modifying existing office floorplans, even if those designs have moved employees into closer proximity with one another in recent years — and away from the perhaps now-beneficial isolation of cubicles.

“There might be some who, as a knee-jerk reaction to this, believe everyone should be enclosed in their own workstations,” he said. “Employees will still want to engage in knowledge-sharing and have a sense of being part of something larger than (themselves). You can still have that with an open office plan that’s safe and abides by social distancing guidelines.”

Judd advocates for a phased reintroduction of employees to the workplace, during which only a certain percentage of employees are returning to a company’s physical location at any one time. Under that approach, Judd said office building tenants can stagger in-use workstations in a more open layout to ensure enough distance between workers.

Dana Nalbantian, principal and studio director in the Morristown office of global design and architecture firm Gensler, is another proponent of the alternating desk approach for companies with workstations in close quarters.

Reimagining workplaces where it’s easy to respect social distancing guidelines, as well as having less employees at work and still primarily working remotely in the weeks after shelter-at-home orders are lifted, are what both experts emphasized over erecting once torn-down cubicle walls.

In bridging the gap from the current situation and a theoretical post-pandemic world, Nalbantian said what business owners should continue to focus on is putting “density on hiatus” in the workplace. Among other things, that means avoiding having employees stuffed into cramped conference rooms for meetings, and still relying in some part on videoconferencing.

In the long run, Nalbantian foresees building developers making some lasting investments in office space design that accounts for the possibility of highly transmissible diseases, such as the installation of modern air filtration systems, the addition of more spacious outdoor areas and more automated entryways so to reduce the amount people are touching the same door handles.

Due to the way an office environment can be a breeding ground for viruses, Nalbantian said owners and managers of commercial real estate sites should be implementing building-wide cleaning protocols.

“We’re actually taking a lot of hints from the health care sector on this,” Nalbantian said. “Because they’re out in front on what it means to be sanitary in the workplace.”

There’s no doubting that the pandemic has raised the ante for those designing, building and managing commercial real estate in New Jersey.

Judd said that, when business owners are asked why their office building is the right choice for their employees to work in either during or after this health crisis … they’ll need an answer.

So, there’s going to be a natural incentive for office spaces that are pandemic-proofed as possible. Judd expects it will be treated as just as attractively as sustainability or other building aspects have been in recent years.

“When tenants have the ability to choose one workplace over another based on what they offer to employees … health safety issues are going to be key factors in that decision,” he said. “There will be a certain base level that’s expected of a workplace, but the forward-thinking developers that go beyond even that are going to be seen as extra attractive now.”

At the same time, employees are going have a different comfort level in the workplace than they did before. Judd says it’s ultimately those workers who will need to be convinced.

“If there’s any doubt, there’s fear,” he said. “And that’s going to stifle this whole get-back-to-work process.”

Fulop, in nod to business community, says he has no plans...