On a day the state announced hospitalizations were down and ventilator usage was way down, Gov. Phil Murphy also had to deliver some sobering news: a single-day record 460 COVID-19 fatalities.

Murphy and health officials have said repeatedly that fatalities should not be viewed as a 24-hour snapshot, as various lags in reporting mean they are a total of parts of different days.

“This is a multiday reality, but it is a very sobering reality,” he said during his daily COVID-19 briefing Thursday. 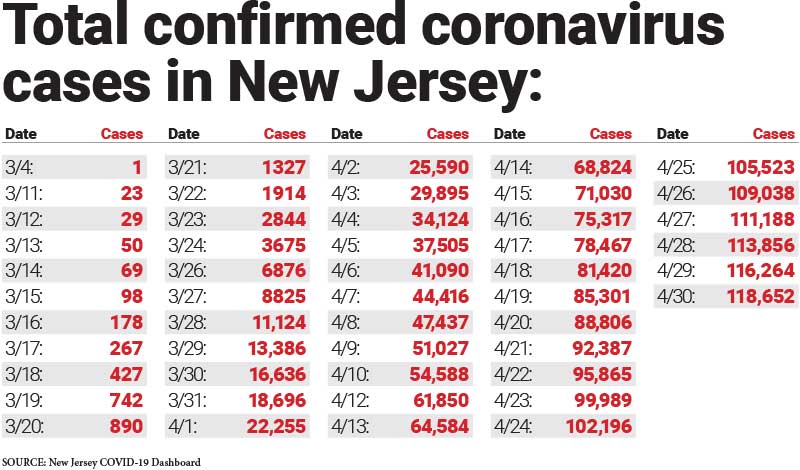 Murphy also acknowledge the timing of the number was unusual — often, the biggest day is Tuesday, when weekend reporting catches up.

And it’s always worth noting how New Jersey stacks up to the rest of the country to put things in perspective. The single-day total of 460 is higher than the combined outbreak total for all but 18 states.

The state now has 7,228 total deaths, which is far behind New York (more than 23,000) but roughly double the third-highest total, coming from Michigan.

And, while many will view that number positively — and they should; it’s the first day under 3,000 in some time — it’s worth noting by comparison that 22 states have fewer than 5,000 cases during the entire crisis.

The better news is on the hospital front.

Murphy noted the number of hospitalizations is down 15% over the past week — and ventilator use is at its lowest since April 4. The state’s surge is believed to have peaked April 14-15.

“The northern hospitals are reporting available capacity, both in intensive care and medical/surgical beds,” she said. “However, the central region is still feeling a bit stressed by hospitalization. And the southern region is actually seeing increases.

The hospital numbers, as of 10 p.m. Wednesday:

Other news from Thursday’s daily briefing:

Murphy reiterated his intention to make a ruling on schools before his self-imposed May 15 deadline. He did not say which way he was leaning, but he did say lowering the 180-day requirement — as New York has done — is not an option.

“There’s no announcement on education which envisions a shorter school year,” he said. “We’re not going to shorten the school year. The only question is, is it going to be remote or physical?”

Murphy said universal testing at the Department of Corrections for inmates and staff is expected to start as early as the end of next week. This is the result of a partnership between the DOC and Rutgers University on the development of a comprehensive plan to expand testing for all inmates and staff.

Murphy also said all New Jersey Transit employees will soon have access to COVID-19 testing at the American Dream site in East Rutherford, which has been serving first responders and front-line health care workers. Murphy said ensuring the health and safety of the men and women on NJ Transit also means enhancing public confidence in the mass-transit system.

“We know that our overall restart and recovery relies on ensuring that residents have greater confidence in their ability to get to work, or the store, as our economy begins to reopen in the weeks ahead,” he said.

“I think, at the beginning of this, New Jersey OEM was thrust into a role that wasn’t really traditional, but, if you think about it — just from hospital buildouts, FMS sites, mortuary affairs, testing, PPE procurement, it is really something to be a part of.”