“I am signing an executive order that lays bare the severity of the financial crisis we face because of COVID-19 — from both plummeting state revenues due to the near-total shutdown of our economy and the skyrocketing costs of fighting this pandemic,” he said during his daily briefing Monday.

“I am rescinding the executive order I signed on June 30, 2019, which directed state Treasurer Liz Muoio to achieve a $1.276 billion surplus by the end of this current fiscal year. Absent significant outside assistance, this is no longer feasible.”

That can’t go on, Murphy said.

“Right now, it’s pouring,” he said. “We are on the brink of having to make very tough and, quite frankly, very unpalatable decisions regarding each of these areas and more. And, we need to have these funds as a safeguard should direct federal assistance to our state fail to surface.”

Murphy said he also will be vetoing numerous bills to appropriate money to any number of causes and programs.

“I don’t want to veto them,” he said. “But, given our current fiscal situation, I have no other choice.”

Murphy said it’s a day of reckoning that is coming.

“These discussions aren’t just happening here in New Jersey, either,” he said. “They are happening across the nation. We need the federal government to step forward with significant investments in our states — both red and blue — to prevent our recovery from being held back because we cannot fund it.

“Every governor shut down his or her state’s economy to combat COVID-19. We all will feel the devastating impact of this necessary, but costly action. Across the country, cuts to critical services are inevitable. And, bankruptcy is not an option.”

Murphy said only Washington, D.C., can fix the problem.

“A fiscal disaster is not months away — these decisions will be on our doorstep in just a few weeks,” he said. “Congress needs to act, and act now.” 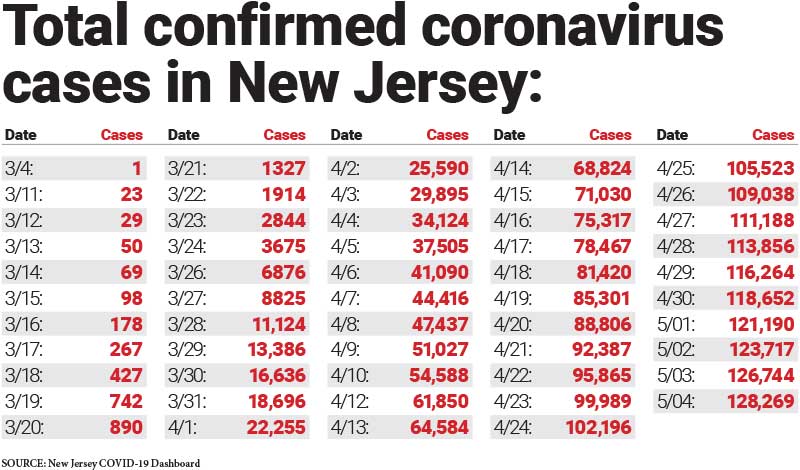 There were only 1,621 positive test results (for a statewide total of 128,269) and only 45 more fatalities (7,910 total). Murphy, however, said the low number likely is a result of a network outage Sunday that may have prevented all cases from being processed.

Murphy noted that’s a drop of more than 1,000 people in the hospital in a week.

“Across every region of the state, we continue to see the overall stresses lessening in our health care system,” he said. “Our hospitals continue to show the positive trends we want — and need — to see if we are get ourselves in a steady position to get on the road back and toward the responsible restart of our economy.

“These numbers are beginning to become the underpinnings of our overarching ideals — that public health creates economic health and that data determines dates.”

“I want to thank the overwhelming number of you who did the right thing and took all of our asks and precautions to heart,” he said. “I know many of our parks filled up early in the day — and I don’t blame you one bit for wanting to get out.

“And, more importantly, we heard of very few incidents of knucklehead behavior that would require me to reverse course and close them again. So, to all of you, thank you for helping us pass this important test.”

Murphy said limiting parking — and limiting the number of daily passes — could help prevent overcrowding on beaches. But he was quick to point out he was not making policy — or even making a suggestion — he was simply talking it out.

“We’re not making any news today on beaches,” he said, adding that some general guidance may be in order, even though the decision may be local.

Murphy said he had nothing new on casinos — noting the fact that they are indoors is the biggest issue.

Murphy on pressure from parents of seniors and spring athletes to reopen schools:

“The pressure has been far more on the other side, to make the announcement to close sooner than later.”