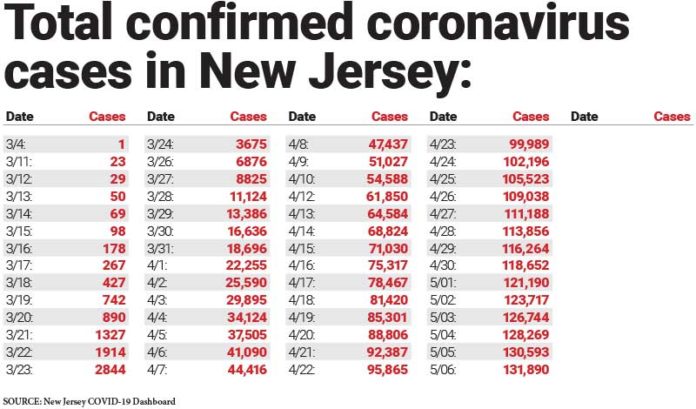 He warned people not to read anything into this. The order needs to be extended every 30 days, or many of his executive orders would have expired. The state of emergency was first declared March 9 and was previously extended April 7.

“I want to make it absolutely clear that this action does not mean that we are seeing anything in the data which would pause our path forward, and it should not be interpreted by anyone to mean we are going to be tightening any of the restrictions currently in place,” Murphy said. “This ensures we will continue on our current war footing for the coming month. The conditions underpinning this declaration have not changed — we are still in a public health emergency.”

Murphy, speaking at his daily COVID-19 briefing, said the extension signals the need to stay the course.

“If this extension signals one thing, it is this — we can’t give up one bit on the one thing that we know is working in this fight: social distancing,” he said. “So, continue to stay at home unless it is necessary for you to go out, and, when you do go out, please keep your distance from others, and wear a face covering.”

Murphy also thanked the public for its efforts — particularly over the past weekend at parks and golf courses. These positive actions will have an impact going forward.

“Those are all decisions that we have to chop through.”

Murphy said he will have a “very comprehensive discussion of testing and contact tracing” in the next few days.

Cindy Mann is a 30-year expert in health policy and former deputy administrator at the Centers for Medicare & Medicaid Services under President Barack Obama, where she was also tasked with implementing the Affordable Care Act.

Carole Raphael is the former CEO and president of the Visiting Nurse Service of New York, as well as the former board chair of AARP.

They will be tasked with three things:

“(We) need to look broadly at this issue — not just for the immediate days ahead, but for the months and years to come,” Murphy said.

“More importantly, we are not going to stop,” he said. “We know that we have an immediate need for hospitals gowns, and we’re doing all we can to source these. And, through the multistate procurement partnership announced Sunday, we are confident that we will not only be able to deliver the PPE and supplies we need, but that we will be able to do so at a lower cost to taxpayers.”

Murphy reminded residents to fill out the census, saying New Jersey is ranked 21st of all 50 states, plus Washington, D.C., and Puerto Rico, in terms of response rate to the 2020 Census. The state is at a 58.6% response rate.

Murphy stressed the importance of getting an accurate count.

“We know that New Jersey was undercounted in 2010, and, because of that, we have left — over the course of the past decade, and even today — untold billions of dollars in federal aid on the table,” he said. “And, if that money isn’t coming to New Jersey, it’s going to some other state. Let’s make sure we get it here.”

Murphy joked that the money would go to Kentucky, the home of Senate Majority Leader Mitch McConnell (R-Ky.).

You can fill out the census online at 2020Census.gov.

Callahan on what citizens should do if they see others not wearing masks in stores:

“The most prudent thing is to let the store management or operator know. We don’t want to see physical or verbal altercations.”