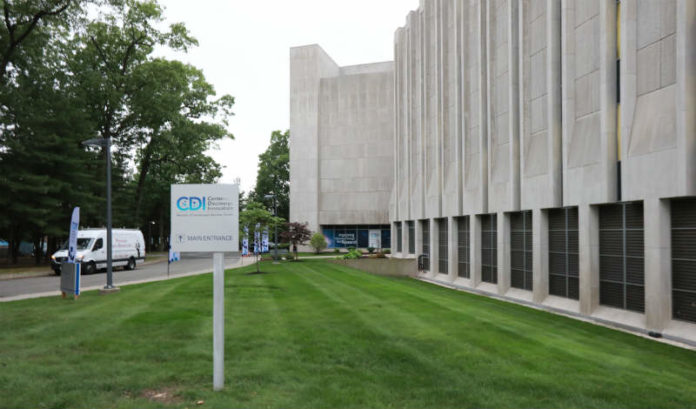 Hackensack Meridian Health created the Center for Discovery and Innovation as an outlet where it could produce cutting-edge cures for some of the greatest challenges in health care. The best thing about CDI? The center has the ability to go from looking at long-term problems to tackling those of the day.

So said Bob Garrett, the CEO of Hackensack Meridian Health.

“We created CDI with a philosophy that we could go from bench research to bedside benefits really quickly,” he said. “And that’s been demonstrated during this pandemic.”

CDI, under the direction of Dr. David Perlin, created one of the first tests to detect COVID-19 in March.

Now, the center has created a convalescent plasma infusion program — one that uses plasma from recovered patients to create a serum that gives antibodies to those newly infected.

“I think this could be a game-changer in this pandemic,” Garrett said. “The study is young, so you have to put qualifiers on it until we have enough data. But some of the early results are fantastic.”

Garrett said the first patient in the study was on a ventilator, but he recovered after being treated. That patient then paid it forward, donating his plasma, which was infused into a woman who was 33 weeks pregnant and very ill.

Garrett said the infusion worked. Within a matter of days, she was discharged. And she and her baby are doing well.

“When you hear stories like that, you realize that this is really promising,” he said.

Garrett said it’s an example of how CDI can react to real-time situations.

“The research arm of an academic organization is often siloed from the clinical arm,” he said. “We’ve brought them together and I think it’s literally saving lives.”

ROI-NJ spoke with Dr. Michele Donato, who is overseeing the study at the John Theurer Cancer Center in Hackensack, to explain the program, which started in early April.

Here are her thoughts, condensed for clarity.

ROI-NJ: Let’s start with the basis of the program. As we understand it, you are looking to give antibodies from recovered COVID-19 patients to those who are suffering from it?

Michele Donato: The program follows the concept of passive immunity. When patients get sick from the virus, their first line of defense is called innate immunity. It can take up to 14 days for the patient to develop antibodies, what we call adaptive immunity. It takes a long time for that to happen. The virus, meanwhile, has shown an ability to pretty rapidly break through that first line of defense. And it’s during that gap that the virus has the chance to invade the body, invade the cells and cause all the damage. So, the concept is to give patients antibodies from someone else to help them fight the virus before patients develop their own antibodies.

ROI: Describe the process of getting the serum that you need to do this. With tens of thousands of recovered COVID-19 patients in the area, there should be plenty of candidates to donate. But we’re guessing it’s not that simple to find donors?

MD: That’s correct. It’s a challenge and the challenge is twofold: One is identifying who has high levels of these antibodies, we call those titers. And to find those people, we have to go through a tough screening process.

MD: We put out a call to people who had COVID-19, had recovered and were well for two weeks, to come on in for us to screen them. It starts with a phone call, where we ensure that they had a positive case and feel they had fully recovered. They come into our testing center here at the John Theurer Cancer Center, where we swab them to make sure that they’re negative. Many come back as still testing positive. So, we tell them to come back in 10 days.

If they are not positive, we take a sample of their blood and send it to CDI, where they have a test that gives us a report as to how robust the immune response is. If we find that they have very high levels of antibodies, we ask those donors to come and actually donate plasma — plasma being sort of the clear liquid portion of their blood. It’s a pretty simple procedure. We collect half a liter of plasma.

But that’s just the start.

MD: We then need to see if they have a high level of these antibodies in their plasma. Those are the only ones we can give to patients in the trial. We are realizing that only a small portion of patients have these levels of the antibodies.

ROI: Sounds like a lot of hurdles. How many people are you screening a week — and how many of those do you find suitable?

MD: We physically bring in about 20 potential donors a day. About a third of them will still be COVID-19 positive. Of the ones who are not, we find a percentage have no titers or levels so low that they can’t be used. What we really want are people we call super donors, those whose levels are very high — that is only about 15% of donors.

MD: That sounds about right.

ROI: How many patients have received the plasma so far?

MD: The study is still ongoing, but we have treated more than 60 patients. The vast majority have been discharged. So, the study, in terms of results and outcome, is not complete. But, so far, it looks promising.

MD: We believe so, yes. Our study enrolls patients who are less than nine days from onset of symptoms. Where we are finding is that patients who have been sick for more than two weeks already have antibodies to the virus. We believe we have to use it early.

ROI: Let’s talk about the donors. They have to be COVID-19 free — but does it matter how long they have been? In other words, do they lose the antibodies over time, meaning you need recently recovered patients?

MD: People who are further out from the infection are less likely to still test positive, which is good. What we don’t know yet is how long the titers are going to be sustained. We know, for example, that in MERS, five years ago, people were found to have titers for up to two years afterward. For COVID-19, we don’t know yet. Part of our study is going to be looking at that. It will tell us if we are able to bring a donor back to donate again, let’s say in a month or in two months or three months. Every time they come to donate, we will check.

ROI: The plasma donation itself — you take half a liter. Is that amount only able to help one person or multiple people?

MD: We are looking at dose of quantity, too. Right now, I like to give a half a liter to a single patient as a larger dose. Part of this study is to look at that. We will be looking to see if we can give 200, 400 or 500 milliliters.

ROI: So, it sounds like there are challenges to get through the process, but, when you do, the success rate is high. Are you going to be able to expand your reach?

MD: That’s what we hope. I think the next phase of this study is going to be to try to open access to newly diagnosed patients who are at high risk of complications — meaning they are older, obese or have other conditions that make them at high risk. We want to try to do more early interventions. That’s what we’re going to be working on in the second phase of this study.

Murphy: N.J. has more than 6M masks available for schools —...