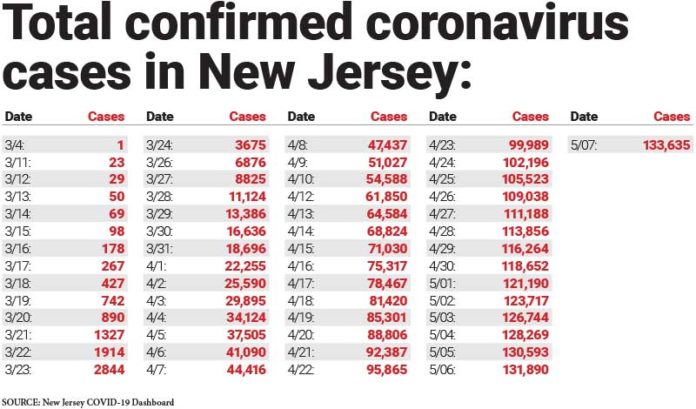 The number of people hospitalized with COVID-19 dropped below 5,000 for the first time since March, as there were 4,996 hospitalizations reported Thursday — a drop of more than 3,250 from the peak of 8,270 in mid-April.

The fact was just one of many noteworthy statistical revelations during Gov. Phil Murphy’s daily briefing.

The number of new cases (1,827) was an increase from Wednesday (1,513), but marked the first time since March 25 that there were two consecutive days of fewer than 2,000 new cases.

There were fewer than 1,500 people on ventilators (1,470) reported, marking the first time the state has broken that barrier since April 4.

Then there were the discharges. At 460, the day’s number was far more than admitted cases (325). In addition, the state broke the numbers out by region, which showed just how much COVID-19 is traveling South:

“As we look to the trend of new cases, we continue to see the daily counts leveling, and the rate of positivity among those who have been tested continues to decrease, as well,” Murphy said.

“Having fewer than 5,000 people in the hospital for COVID-19 is a milestone. It means that the stress on capacity is lessening. Just three weeks ago, we hit our peak at 8,270. This number has been brought down by 40%.”

Murphy said it’s no time to be lax, however.

“The numbers at our hospitals continue moving in the right direction,” he said. “But, as I warned yesterday, while we’re seeing good signs, we cannot lull ourselves into thinking that all is well. We are still in the midst of a public health emergency. Our hospital counts are still far above what they would be in normal times.”

The fatalities show that. There were 254 additional COVID-19 deaths, bringing the overall total to 8,801.

Murphy did not want to discuss the legal reasons for the overturning of charges against Bill Baroni and Bridget Kelly in the Bridgegate scandal, saying the decision by the U.S. Supreme Court will not lessen the impact of the incident on the state.

“There’s no escaping that this was a deep violation of the public trust,” he said. “It’s a stain no matter how you slice it in the history of our state.”

Murphy said he felt the incident likely helped him get elected.

“I probably got elected overwhelmingly to fix the economy … but I think I also got here based at least in part of folks are sick and tired of the way things have been working in this state for too long.”

“Public trust is a hard thing, when you lose it, to get it back,” he said. “God willing, every day, we collectively together are putting one foot in front of the other and, hopefully, we’ll succeed in that respect.”

“This is an unemployment crisis unlike that which we have ever seen,” he said. “The sheer volume of claims filed in just the past two months is far, far greater than anything the department, or its systems, has had to work through. Weekly claims are, literally, many times more than the department has historically dealt with across entire months.”

Murphy said he has directed the New Jersey National Guard to deploy its members to long-term care facilities beginning this coming weekend to assist in COVID-19 mitigation efforts.

Murphy said more than 120 soldiers will be in the first tranche of assistance, and that the state is working with long-term care centers to backfill the need they are not able to fill on their own. They will serve non-medical roles.

“We don’t take this step lightly, but we take it knowing that the crisis in our long-term care facilities requires us to take it,” he said.

“As a conceptual matter, it’s something that we’re open to,” he said. “(But) you could make a pretty compelling argument that we’ve never needed government more than we need it right now.”