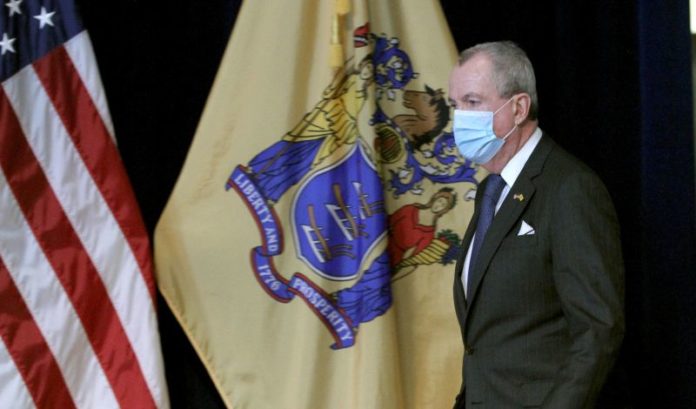 Gov. Phil Murphy got closer to announcing timelines for key stages in New Jersey’s reopening during his daily COVID-19 briefing Monday. He just wouldn’t commit to any dates.

“I’m not going to marry myself to a day, but I would hope by the end of the week — assuming the curve is going in the right direction, and that’s a big assumption — that we could give a little bit more guidance as to some other things that we’re looking at on that road back to recovery,” he said. “But don’t hold us to a day.”

He did say that, on Tuesday, he will announce more specifics around increased testing and contact tracing — two initiatives that must happen to open up more of the state.

And he also said the possibility of having some type of high school graduation is not out of the question — by the end of the summer.

“If you’re graduation is June 1, I can’t honestly tell you that you’re going to get there by then,” he said. “But could we get there down the road. The answer is yes.”

Murphy said patience is key. And said he took exception to a tweet by state Sen. Declan O’Scanlon (R-Holmdel), who called for people to openly rebel against the stay-at-home order.

“The house is still on fire,” he said. “Has it gotten better? It’s clearly gotten better. But, let’s be responsible. Let’s do this together. Opening up county and state parks and golf was a big step.”

So..first time I’m going to suggest this….but it’s time. Everyone…defy the @GovMurphy ! Go outside your house!! It’s ok, you can trust me! Look South/Southeast…revel in that moon! We’re likely going to take this rebellion a few steps further next couple weeks. Get ready!

Murphy said that, the longer the state commits to social distancing, the better the results will be.

“The benefit you get in terms of literally cracking this virus to the ground — another two weeks at any point in time of social distancing beyond the point that you otherwise would have stopped social distancing — is enormous,” he said. “Your jaw drops — from any point to two weeks later.”

Other notes from Monday’s briefing:

U.S. Sen. Bob Menendez (D-N.J.) talked about his “Smart Fund” proposal he hopes to add to the next round of COVID-19 funding.

Menendez said a national emergency requires a national response — one that brings the most money to the hardest-hit areas. That’s why he is cosponsoring the program, formally called the State and Municipal Aid for Recovery and Transition Fund, along with Bill Cassidy, a Republican senator from hard-hit Louisiana.

“We call it the Smart Fund because it’s common sense,” he said. “It’s $500 billion in flexible funding with priority given to areas of our country with the greatest need based on COVID-19 infection rates and lost revenues due to the economic fallout.

“The Smart Fund ensures that New Jersey gets its fair share of federal funding.”

He thinks the program is especially important to the overall U.S. economy.

“(The Northeast) generates 20% of the GDP for the entire nation,” he said. “You want to see the economy thrive, you have to make sure this region thrives and states in general thrive in order to create the employment, tax revenues and the consumer confidence that’s necessary.” 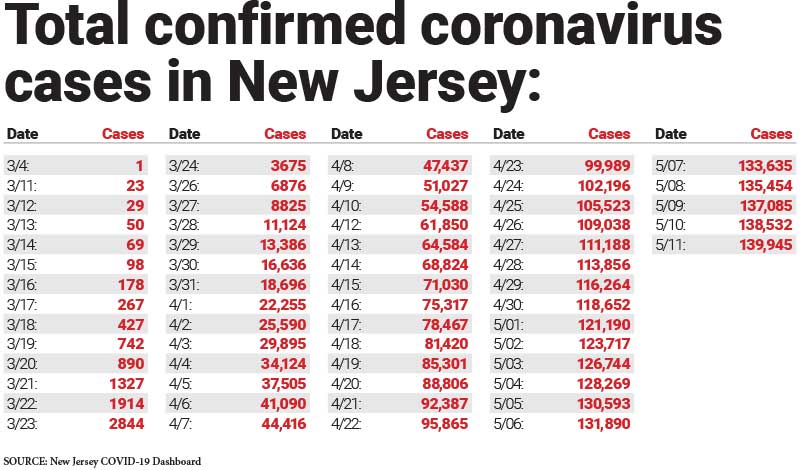 Murphy also announced there were 59 more fatalities, raising the state total to 9,310.

The hospital numbers, as of 10 p.m. Sunday night:

“Our Guardsmen and Guardswomen have been an integral part of our response team,” Murphy said.

Murphy said he is considering a suggestion to have a second budget address.

State Police Superintendent Col. Pat Callahan clarified the stance on car parades for graduations and other occasions. They are fine, he said, if a few people want to stand on a doorstep and watch cars go by. They are not OK if a large group of people — potentially high school seniors — gathers together and has cars go by.

“The more we can cover our faces, the better off we’ll be. And I think, increasingly by the day, if not the minute, there’s less stigma associated with it. It’s just what we’re doing these days. It is what it is.”