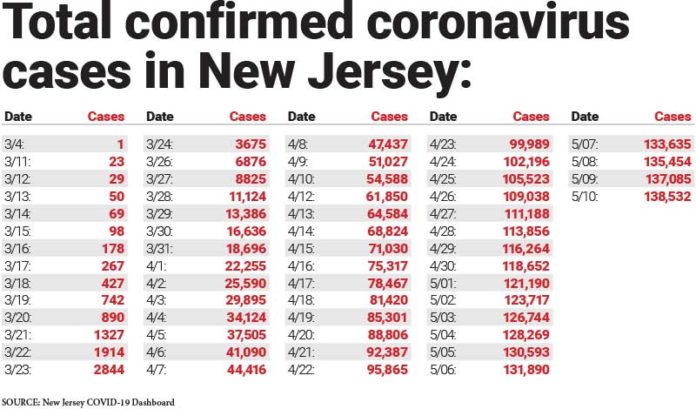 The number of COVID-19 patients on ventilators dropped below 1,000 for the first time since New Jersey began charting the number April 4. On Sunday, it was down to 994, the state reported.

The high was 1,705 people April 14. The state’s COVID-19 cases were peaking at that time and officials were asking for 2,500 ventilators at the time — fearing a bigger surge.

The number of people on ventilators was one of four encouraging numbers the state released Sunday.

Murphy, during his daily briefing Saturday, said he continues to be encouraged by the hospital numbers.

“The number of new cases continues to show an overall positive trend, but where we are seeing the most progress is in the declining positivity rate — that is the number of tests which are coming back positive,” he said.

“As you can see, the daily positivity rate has been coming down —steadily — over the past several weeks. And, for the latest tests which we can assign a collection date to — in this case, May 5 — that rate has dipped to 27%. So, we’re making progress.”

In late March, the U.S. Food & Drug Administration announced an initiative to collect blood plasma from those who have recovered from novel coronavirus to treat patients with serious or immediately life-threatening COVID-19 infections. Researchers are finding the antibodies in plasma from recovered patients may help others in their own fight against the virus.

The state Department of Education will launch an online application process for eligible districts to receive their shares of $280 million, Murphy said.

The money will go to help cover the costs of purchasing educational technology, providing remote instruction, cleaning and sanitizing buildings, and ensuring support services for students who require them, among other COVID-19 response-related expenses, Murphy said.

“Getting this funding flowing directly to our districts is a win for our schools and educators, our students, and our taxpayers,” Murphy said.

The state’s response rate has increased to 59.8%, but it’s still 21st among the 50 states, Washington, D.C., and Puerto Rico. Murphy reiterated the importance again Saturday.

“New Jersey was undercounted in 2010, and, because of that, we have left billions of dollars in federal aid on the table over the past decade,” he said. “And that undercount even impacts us today in our efforts to get more COVID-19 relief to our state.”

“This is a big step forward, and to know that it was made here in New Jersey, with the support from our state’s flagship institution of higher education, is a great feather in our cap. We all know that testing is a critical part of our getting on the road back, and the easier and more accessible testing is, the more secure we will be on the road.”

For St. Joseph’s, opening of Totowa Health Campus is just the...