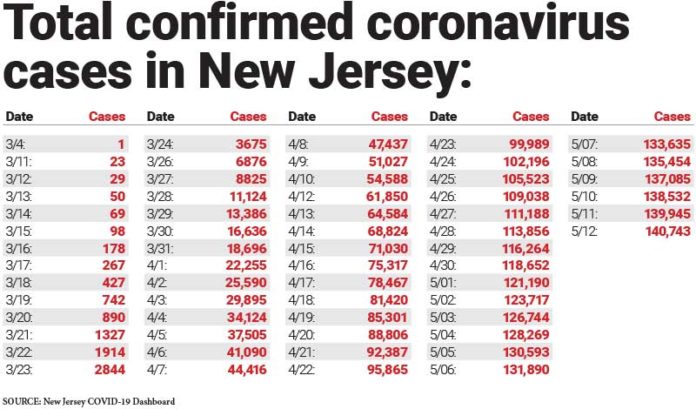 The single-day number of new COVID-19 cases in New Jersey dropped under 1,000 for the first time since March 25 on Tuesday.

And, while Gov. Phil Murphy cautiously downplayed its significance, the announced figure of 848 must be highlighted. It is a dramatic drop from Monday (1,453), which continued a recent trend of dramatic drops. The state has announced fewer than 2,000 cases for seven consecutive days.

In comparison, the state had as many as 2,000 new cases every day (except one) since March 28. The exception was last Tuesday.

“It’s the first day we’ve had under 1,000 positive test results in a long time,” Murphy said. “That’s the good news. I would just say, we’d like to smooth this data out over several days. I wouldn’t read a whole lot into that, but, if it’s real, that’s a good development.”

There may have been a reason for Murphy’s reluctance to celebrate. Speaking at his daily COVID-19 briefing, he gave other statistics that were sobering.

New Jersey has the highest percentage of cases per 100,000 of population of any state in the country — which obviously includes New York.

Murphy also announced 198 more COVID-19 fatalities, bringing the state total to 9,508. The state likely will eclipse 10,000 by the end of the week. 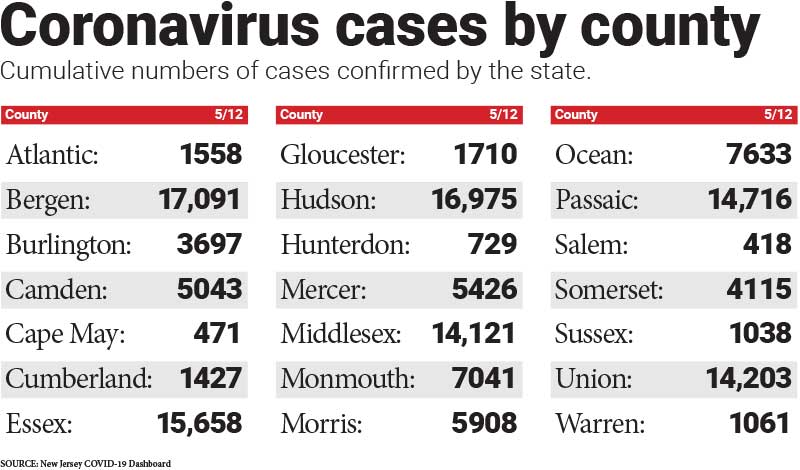 A look at the new cases by county shows how COVID-19 is moving south:

The Top 5 counties from Tuesday’s report (with the total number of cases):

The Top 3 counties for overall cases came in as follows:

Murphy said he still hopes the Legislature passes the group of incentives he proposed back in October 2018.

“I think they’re still as relevant today as they were then,” he said. “I think it’s a package of really smart incentives and, in some cases, set a bar unlike any other American state. The Evergreen Venture Fund is a unique animal in America that I think would have huge implications for our innovation economy right when we need them. I’m sticking to them.”

Murphy, on reports that folks in parks used plastic bottles to collect waste, due to the fact that bathroom facilities were closed:

The unintended consequence of people using plastic bottles is not an appetizing outcome.”