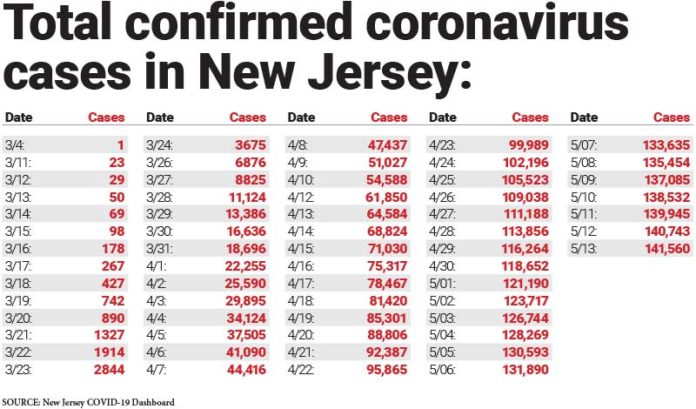 Gov. Phil Murphy arguably made his strongest case for more federal funding when he discussed the state’s revenue during his daily COVID-19 briefing Wednesday.

The state’s revenues in April, Murphy said, were down nearly 60% — an unprecedented $3.5 billion — he said.

“This report shows the fiscal cliff we are now looking over the side of,” he said.

Murphy said April’s numbers generally reflect a lot of economic activity from March — including the weeks before the state began the systematic shuttering of our greater economy.

“Certainly, this is one month,” he said. “But, we know the numbers for May —which will encompass all of April — will almost certainly bear similar or worse news.”

Murphy also noted the loss of revenue caused when the state pushed the filing of personal income and corporate business taxes from April 15 to July 15.

“And, we expect an increased number of filers taking extensions when the July deadline comes around, due to COVID-19’s staggering economic impact. This makes direct assistance from the federal government all the more necessary and all the more urgent.”

Murphy announced Wednesday there were 1,028 additional COVID-19 cases, bringing the state total to 141,560. The total marked the eighth consecutive day the state has had fewer than 2,000 cases — and the third below 1,500. It just missed being the second below 1,000.

Murphy also announced there were 197 additional COVID-19 fatalities, bringing the state total to 9,702. The state is likely to top 10,000 by the end of the week.

The state said more than 21,000 people signed up to get more information on being a contact tracing in the first 24 hours of the program.

Callahan, who said recruiting numbers for law enforcement have been down in recent years, said he hopes all public service professions will see an increase, as they did after 9/11.

The recruiting of law enforcement officers, men and women, is very difficult in this day and age.

Persichilli said nursing enrollment has been up — and she gave a word of thanks for the student nurses who are helping out now.

“The student nurses that are coming out to help volunteer and go into long-term care are remarkable.”

Murphy, on whether he personally gets down while dealing with the daily struggle of running a state during a pandemic:

I’m like anybody else. I’m a human being. And this is an incredibly difficult chapter in our country’s history and our state’s history. Maybe the most difficult, arguably. Occasionally, it gets to you, but, at the end of the day, the responsibility that I’ve got, that we have got — all of us — is to keep moving. We’ve got to get through this, save as many lives as we can and responsibly get the state back up on its feet as fast as we can.”