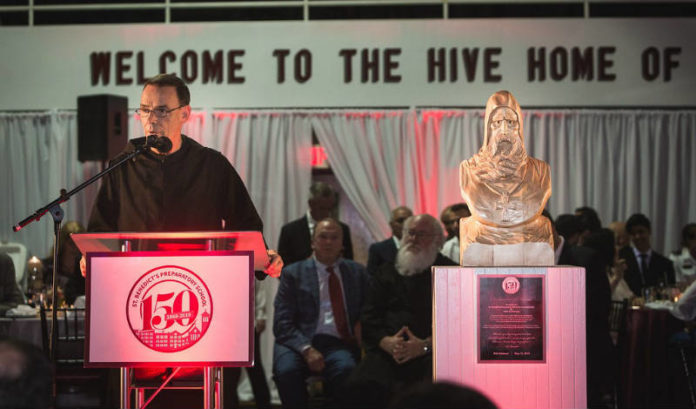 St. Benedict’s Prep in Newark announced Thursday night that it will become co-institutional, adding girls from the closing Benedictine Academy in Elizabeth, beginning in the fall.

Leahy said the effort to combine the school was student-driven — and credited the girls for making the push after their school announced it was closing earlier this year.

“This whole project has been driven completely by kids,” Leahy said. “The board of trustees voted overwhelmingly to support these kids in this effort. I don’t think they would have supported it this strongly had it not been kids-driven.”

Leahy elaborated after the chat in a statement to ROI-NJ.

“I’m just trying to listen to a bunch of kids who are telling me what they need,” he said. “We weren’t looking to do this. But once they announced that their school was closing, these impressive girls — most of them black and brown, and many from Newark, East Orange and Irvington — kept pushing. They didn’t just want a Catholic education. They wanted a Benedict’s education. Who are we to tell them they can’t have that?”

A girl on the program Thursday night said 61 girls are ready to enroll, although Leahy said it’s unclear how the girls will be integrated when the school reopens.

“What this will look like? I have no idea right now,” Leahy said. “That’s the fun of it. You can go into a battle with a battle plan — but no battle plan ever works out according to the plan that you set. You have to adjust and move and change things as you go.

“We’re going to try our best to provide this opportunity.”

After the chat, St. Benedict’s issued a formal statement, saying: “Beginning July 6, St. Benedict’s Prep will begin offering enrollment for a girls’ prep division (grades 9-12) to the displaced students of Benedictine Academy and other interested female students. The monks of Newark Abbey and the St. Benedict’s Prep board of trustees both overwhelmingly support this endeavor.

“St. Benedict’s Prep is where community is built, character is developed, legacy is celebrated, leaders are created, paths are paved, faith is lived. … This is not changing.”

Leahy said the genders could be separated during the day and will not have classes together — it’s why school officials are saying co-institutional instead of co-educational — but said, like everything else, the future is open for discussion. (St. Benedict’s already admits female students in lower grade levels, part of several changes throughout the school’s history.)

St. Benedict’s has been closed to in-school learning since March 13. And Leahy said it’s uncertain when the school will reopen for in-school learning. When it does, the initial plan is to have female students on the main school property, but that could change.

“I’m not sure when and how we’re going to be in school,” he said.

He said current students and alumni should think about how the school operated in the past.

“That’s not coming back, in my opinion, anytime soon,” he said. “School is going to be very, very, very different.”

Having girls will just be one part of it.

Although the chat specifically referenced Benedictine Academy, numerous Catholic schools around New Jersey — at all grade levels — have announced closures at the end of the academic year.

St. Benedict’s Prep is widely regarded as one of the finest schools in the state, as 98% of seniors graduate — and 99% of graduating seniors attend college. Academics and character are stressed. And various athletic teams — most notably boys soccer — have a history of competing nationally.

The school’s success educating inner-city students has been noted nationally, most recently on a feature on “60 Minutes” in 2016.

Its board contains some of the most accomplished business leaders in the state, led by Chair William Connolly, president of William H. Connolly & Co., and Vice Chair Robert DiQuollo, president of Brinton Eaton Wealth Advisors.

Other notable board members include Kevin Cummings, John Degnan and Hans Dekker.