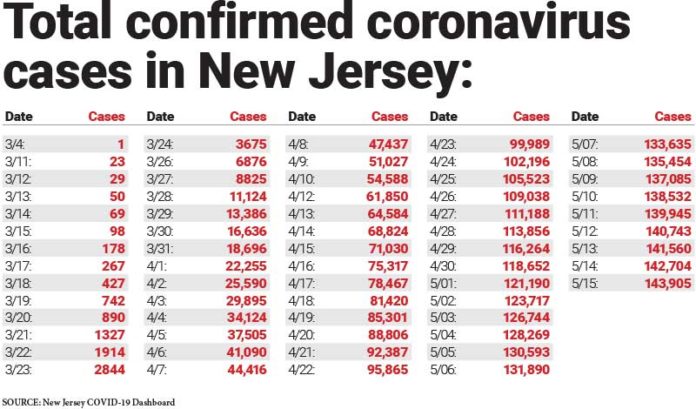 Gov. Phil Murphy announced Friday the state has surpassed 10,000 COVID-19 fatalities — a sobering statistic no matter how you look at it.

“We have passed a grim and solemn milestone,” Murphy said.

And here are the hospital numbers, as of 10 p.m. Thursday night:

The numbers represent the second consecutive day the state has had fewer than 4,000 hospitalized.

Murphy announced the state’s July 7 primary election will be done “primarily” by mail.

In addition to returning them by U.S. Postal Service, the state will also require counties to distribute secure drop boxes for voters to turn in their completed ballots.

Murphy said the state will ensure that a limited number of in-person polling places in each county will be open.

“While many voters have seamlessly transitioned to voting by mail, we know there are other voters who prefer to cast their ballot in person, in addition to voters with disabilities who cannot fill out a vote-by-mail ballot,” he said. “For in-person voting, we plan to require at least one polling location to be opened in each municipality, and social distancing protocols will be enforced within these polling locations, including the sanitizing of touch-screen voting machines between voters.”

Murphy said the deadline by which votes must be received by a county board of elections to be counted as valid will be extended from 48 hours after polls close to seven days after polls close — but noted that the ballot must be postmarked by election day.

Murphy on voting by mail.

Our goals are twofold — to maximize our democracy while minimizing the risk of illness. We want everyone to participate in a safe and fully democratic process.”