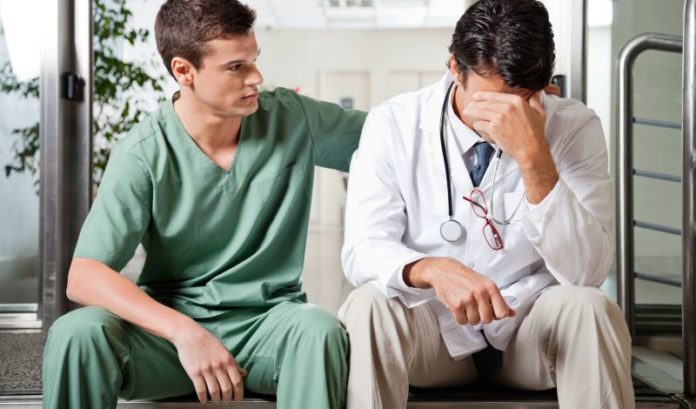 Dan Varga was a chief resident at the University of Louisville Hospital in 1988, when victims of one of the deadliest school buses crashes in U.S. history — one that killed 27 and injured dozens more — arrived at the medical center.

He was working in Texas Health Presbyterian Hospital in Dallas in 2014, when a misdiagnosed patient died from Ebola after unknowingly infecting two nurses who were treating him.

And he has been in countless hospitals throughout his career during periods of trauma, natural disasters and other mini-pandemic scares, such as H1N1 and SARS.

Varga, the chief physician officer at Hackensack Meridian Health, has seen a lot in the medical profession, but he said he never has seen anything like the COVID-19 pandemic.

It’s a numbers game, Varga said. One that caregivers are playing with bad odds.

“If you infect a hundred people with COVID, 80% of people are going to have zero to minimum symptoms, and then 19% are going to have it and survive,” he said. “But, when you talk about frontline caregivers who live through this, many of whom get sick, several of whom have died and many of whom will live with what they live through for the rest of their lives, the residual impact of this to the caregiver is overwhelming on a level that I’ve never seen, even in mass casualty sorts of events.”

Varga said the fact that treatment protocols are being developed on the fly is adding to the anxiety and uneasiness of health care workers — and is the biggest differentiator of the type of care he has overseen in previous traumatic situations.

Varga said the Carrollton Bus Crash in Kentucky was traumatic for all involved. At the time, the crash resulted in the third-most fatalities of any such accident in U.S. history.

“But, at the end of the day, we knew how to care for those people,” he said. “It was managing burn victims and trauma victims and all the things we do.”

“This is something where, in many situations, we do everything we can and we’re just flat-out simply helpless — and there’s so many of them and people are putting themselves at risk in a lot of situations knowing upfront that the patient’s not going to survive,” he said.

The fatalities, more than 10,000 in the state now, take a huge toll on caregivers, health officials said.

Amy Mansue, a longtime health care leader in the state who serves as the chief experience officer at RWJBarnabas Health and was asked by Gov. Phil Murphy to coordinate and oversee coverage in Central Jersey, said the impact of seeing so many people succumb is psychologically devasting.

“We’re seeing death rates that we never could have imagined,” she said.

And, while fatalities are part of the profession, she said caregivers are dealing with them in different ways during this crisis.

“We have a very clear process about how we provide support to families that go through that, and we’re not able to do that now,” she said. “We can’t have those conversations as we would normally do. We haven’t gotten to know those families over the course of a long illness.”

Then there’s impact of the reality that caregivers can become the next patients.

“Very few times do we find ourselves in a literal, figurative war, where we’re having the same level of risk for both sides of the equation, both the caregivers as well as the people being cared for,” she said. “That requires a tremendously careful thought process about how we address all of this.

“We not only have to support the family, but also support our caregivers who we know are suffering terribly.”

Much of that support comes internally.

Varga praised Hackensack Meridian Health, which — combined with the resources at the Carrier Clinic — has put together an employee wellness/recovery program.

“We’ve had our employee assistance program in place from the get-go to really help folks with this,” he said.

Support is about more than just mental health, it’s providing physical support in the workplace, too, Varga said.

“That’s one of the reasons we staffed up as much as we have,” he said. “The reason we’ve redeployed nonclinical people into clinical space is so the frontline folks dealing with this stuff could actually breathe and keep doing what they’re doing.”

The staff, Varga said, helps itself.

Holy Name Medical Center in Teaneck is one of the hospitals in the epicenter of the outbreak in New Jersey. CEO Mike Maron said he has seen that internal support, but he also knows his leadership team — and health care officials across the state — needs to do more for front-line workers.

Especially if COVID-19 returns in force this fall, as many are predicting.

“These caregivers devoted themselves to fighting this — as they always do,” he said. “My biggest fear is a second round where they have no more assistance than the first, because they definitely stepped up and did their part.

“Their frustration is going to go through the roof if they look at people like me and other policymakers, including the governor and the commissioner of health and say, ‘You had plenty of time to learn and figure this out and we still don’t have testing or gowns and we’re not sharing data better?’”

No matter how many waves come, Mansue said health care leaders need to be ready to handle the impact of such a psychologically devastating event on health care workers.

“They didn’t sign up for war, and we’re in one. It may not have guns and armor, but it has the same impact,” she said. “We need to be ready to address the mental health needs in our communities as well as in our workforce.”

‘We are an industry that is about more than putting money...