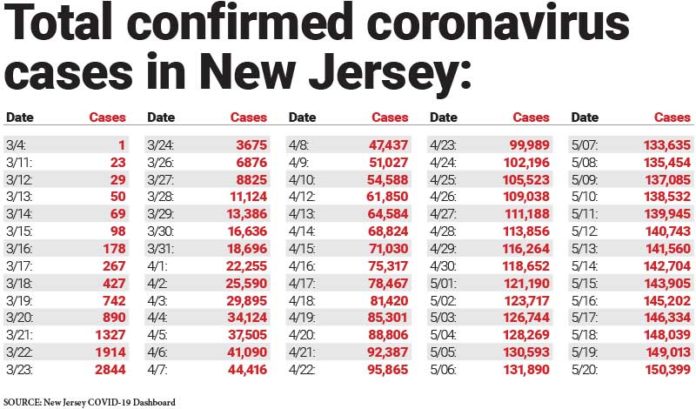 Gov. Phil Murphy suggested strongly that more reopenings could be announced Thursday — and raved about how decreasing hospital numbers are helping to make that happen. But, on a day when New Jersey surpassed another milestone in cases, Murphy reminded folks that the state’s still-high numbers are limiting his options.

There were 1,670 more COVID-19 cases announced, bringing the state’s total to 150,399. Only seven countries (in addition to the U.S.) have surpassed that number.

That number has remained around 200-400 daily for some time. It was announced as 261 Wednesday.

“If you want to point to one data point that says we’re not out of the woods yet, it’s that one,” he said.

Murphy, speaking at his daily briefing, said that number is in real time from a 24-hour period ending the night before.

“The hospitalizations talk to the evidence of ongoing spread in our community,” she said.

The number of fatalities is holding relatively steady, too. Murphy announced 168 more, bringing the state total to 10,747.

Murphy, when asked about more retail openings: “We are trying to get the non-essential retail thing as right as we can,” he said. “I am hopeful that, at some point, sooner rather than later, we’ll be able to open that up even wider. We’re just not there yet.”

He reiterated the idea that businesses with outdoor availability are more likely to return sooner.

Persichilli said the state now has 15 cases of multisystem inflammatory syndrome in children ages 2-18. There have not been any fatalities, but Persichilli said 11 of the 15 have tested positive for COVID-19 and four are hospitalized.

Persichilli said there has been an increased number of scams where people are getting texts from supposed contact tracers asking for their Social Security number and bank/credit card numbers.

She reminded folks that such information is not needed to do a contact tracing — and will never be asked.

Jared Maples, the director of the state’s Office of Homeland Security and Preparedness, said the scams — usually done by text — have been going on since April. Other scams asked people to click a link to get to a contact tester.

Murphy shook his head at the idea people would scam others through contact tracing.

“There’s a special place in hell for people like that,” he said.

The testing sites, which are supported by state and local officials, Walmart and Quest Diagnostics, will test adults who meet CDC criteria on who should be tested, including first responders, health care providers and others with symptoms of COVID-19, and those in high-risk groups without symptoms.

The sites will be open Mondays, Wednesdays and Fridays, from 7 a.m. to 9 a.m., although next week they will be open on Tuesday instead of Monday because of Memorial Day.

The testing sites will require an appointment through Quest’s online portal and app, www.MyQuestCOVIDTest.com, which will screen and schedule appointments for those individuals that meet medical eligibility for the testing sites.

Murphy, when praising the efforts of NJ Sews in Unity, volunteers who have produced and donated more than 7,500 hand-sewn masks, 120 gowns and more than 570 other items, commented on their logo:

Looks like a little bit of a Soviet Union motif there on the right. I love the workers-first notion.”