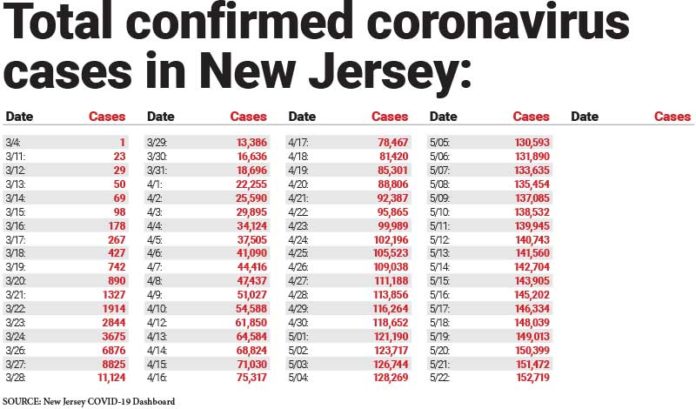 With each passing reference, the idea of having outdoor high school graduations appears to be a matter of how — and when — not if.

Gov. Phil Murphy’s latest comments on the issue indicated the state could have a recommendation by the middle of last week.

“We continue to say there’s hope for those who want to have some sort of outdoor, properly socially distanced graduation ceremony,” he said. “Your hope is well placed — and I hope that we can have some guidance for you earlier midweek. We want to get this right. This would be a big gathering and it has to be done right.”

Murphy, speaking at his last daily COVID-19 briefing before taking a three-day break, said his concerns of how to social distance at such events — preventing a situation where one positive case becomes a so-called “superspreader” — is the top concern.

“The impact the virus has on individuals from those gatherings is much more consequential and more difficult than just getting it in a sort of passing way,” he said. “Please, folks, we’re not doing this for any reason other than to keep as many people healthy and alive as possible.”

Murphy has said for weeks and months that questions regarding graduations have been the most frequent — especially from the parents of high school seniors.

“There are plenty of logical, innovative ways that parents and school officials have proposed to make this happen safely, the government just needs to get out of the way,” O’Scanlon said.

Attack of Sweeney, praise of Coughlin

Murphy, in explaining his desire for more borrowing and more aid, took a shot at Sweeney while praising Assembly Speaker Craig Coughlin (D-Woodbridge).

“We need Washington to step up with significant direct fiscal assistance for states,” he said. “Every day, it seems, this becomes a more and more bipartisan endeavor. And, that’s because more and more people — in both parties — are seeing what this support means. But, there are also just as many minds that remain closed and intractable — and one of those closed minds controls the Senate agenda.

“But, let’s be clear about what we’re asking for. Some of the closed-minded call this a “bailout.” I’m not sure what they mean, other than trying to use charged words for partisan gain. Here’s what this aid really means. It means being able to pay our police, fire and EMS first responders, it means being able to keep our health care workers on the job for our recovery, it means being able to ensure that our kids have the educators they will need come fall, it means the trash being picked up, it means having the army of workers at the Department of Labor culling the backlog of claims.

“In that, I thank Assembly Speaker Craig Coughlin for his leadership in posting for a vote legislation that would allow us, as a state, to take advantage of record-low interest rates to get the funding we will need to preserve and protect our vital economic growth and social programs.”

Murphy said the state is getting its first look at the financial cliff that is approaching.

“We have two choices,” he said. “We can toss our state into the abyss or we can take measures that will allow us to slowly back away from the edge, and keep our feet on solid ground.

“I know the outcome I prefer, and I hope that the Legislature, and our leaders in Washington, will join us.”

Health statistics continue to improve in a positive way, as the latest hospital numbers show the number of those hospitalized may soon dip under 3,000. The number of patients on ventilators is now under 700.

Hospital numbers, as of Thursday 10 p.m.:

Murphy was noncommittal on whether the state would consider giving money to undocumented workers who have paid taxes.

Murphy on meaning of Memorial Day:

It’s about our veterans, it’s about the members of our armed services, it’s especially about those who have lost their lives defending our nation and standing up for our values — and there’s no values anywhere in the history of man that comes close to the American values. And no state has stood taller in defending those values, every step of the way — from the Revolution to right up to today — than New Jersey.”