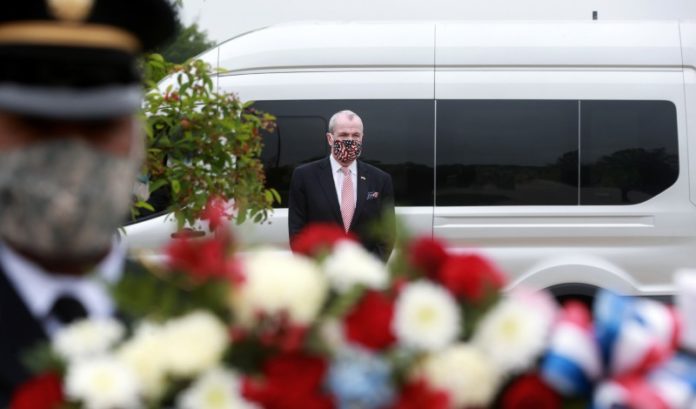 Gov. Phil Murphy spent Memorial Day honoring veterans — and defending his decision to keep New Jersey as closed as it is.

Speaking on CNN’s “New Day” with Alisyn Camerota, Murphy said he wants to open gyms, hair salons and even churches, but continued to say the state isn’t ready.

“I want to open salons and gyms as much as anybody,” he said. “But, when you talk about indoors, lack of ventilation, close proximity, sedentary — you saw that salon worker in Missouri and the spread that she engendered, that’s real — and, so, gyms. I want to get them open as much as the next guy, but we’re not there yet. I want to do it responsibly; I don’t want to kill anybody.”

Murphy said the same holds true for churches — but said their setup doesn’t lend itself to reopening.

Murphy said he had a similar discussion with President Donald Trump during a call Friday.

“We had a spirited, constructive discussion on Friday about churches,” he said. “We’re not there yet. I understand his strong passion to get churches open. But I said, at least in New Jersey, we’ve got to do it a certain way. We got to do it with the right way and the right timing. I’m optimistic we can do that.”

“I’m a Roman Catholic and I personally want to get back,” he said. “I hope we can do that here in New Jersey sooner rather than later, but, again, I want to do it right and responsibly.”

Murphy also said a planned protest at Point Pleasant would not sway him.

“I don’t begrudge their right to protest, but they don’t sway me. The only thing that sways me are the facts and the data and the science.”

Murphy said he wasn’t surprised that New Jerseyans were generally well behaved at the Shore, but he noted the weather — which undoubtedly kept thousands away — helped, too.

“I don’t think we can draw many lessons from this weekend, but the plan worked out with the local mayors and counties is a good one — it largely leaves it to them to execute,” he said. “(There is a) big focus on limiting capacity, social distancing, strong encouragement to wear a mask.

“New Jerseyans have been incredibly responsible throughout this entire crisis and I have no reason to believe that they won’t continue to be.”

“There’s going to be a whole list of things that we’re just not going to be in agreement on, but, when it comes to saving lives, we’ve found common ground with him and the vice president and his team, and I hope that we can continue to do so.”

I say this each Memorial Day and, perhaps with all that is going on around us today, these words will take on an even more special meaning: We do not celebrate Memorial Day. We commemorate this day. This is a solemn day. A day to remember our hallowed and fallen dead. A day to remember those who gave to this nation their full measure.

Today, we also remember the many honored veterans who survived wars only to die at the hands of COVID-19.”