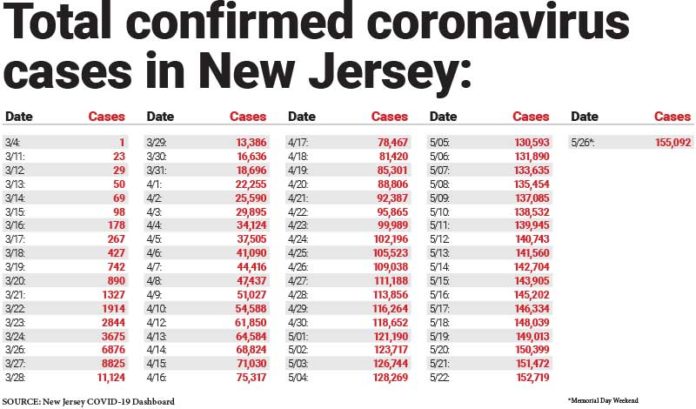 Gov. Phil Murphy said he hopes the state — and the country — do an extensive look into the handling of the COVID-19 pandemic. He just doesn’t think it should be done now.

Murphy, responding to a bipartisan commission that was set up by the New Jersey Senate last Friday, repeated his desire to have a 9/11-type commission to look into all things COVID-19 — when the pandemic has passed.

“We’re still working 24/7 to save lives,” he said. “We get new hospitalizations every day.”

Murphy, speaking at his daily briefing, said care for existing patients is the top priority.

Murphy noted the 9/11 Commission was established more than a year after the tragic day. And, as an avid history buff, he compared setting up a commission now to doing so in the middle of World War II.

“This is like 1943, trying to have a separate investigation on which front you wanted to land your troops in, in ’44,” he said.

Other notes from his briefing:

The key health indicators — hospitalizations and the number of patients on ventilators or in intensive/critical care — continue to drop.

The number of patients being treated has fallen to 2,723 — down roughly 1,500 over the past two weeks.

The state received an additional 703 positive test results, for a current statewide total of 155,764 and had another 54 fatalities, increasing that number to 11,191.

Murphy acknowledged those numbers may be down, due to a lag in holiday weekend reporting, but said he takes heart in what may be a more accurate measure, as the “daily positivity” for test samples from May 21 was at 5%.

Murphy has given the go-ahead for professional teams to start practicing, but still has youth teams on hold.

The reason is twofold, he said. For starters, pro teams obviously are more rigid to guidelines. In addition, it comes down to an ability to “work from home,” which pro athletes cannot do.

“We continue our work with all stakeholders, including youth sports leagues, to hopefully see their resumption in the near future,” he said. “But, where professional teams are concerned, and with the facilities and resources they have to meet the demands of public health, we felt we could take that step forward.”

Murphy said he was thrilled.

Murphy also said he knows the bad weather helped keep people home — a scenario that is not forecast to repeat itself next weekend.

Murphy offered kind words for Elizabeth Fulop, the grandmother of Jersey City Mayor Steve Fulop. She passed away due to COVID-19 at the age of 95.

Born in Romania, her route to the United States was circuitous. She and her husband, Bentsi, left their native Romania after being forced to live in a Jewish ghetto during World War II, moving first to Israel, then eventually to America, and New Jersey — specifically, Essex County.

She worked alongside her husband Bentsi and her oldest son, Arthur, at the family-owned Newark deli that stood next door to City Hall.

Elizabeth is remembered for her strong will — outspoken, offering her opinion regardless of whether or not you wanted it, and independent — living on her own until she was 94 years old.

However, the abiding quality that she will be remembered for was her generosity — whether it was for a charity, a family member or a stranger, it didn’t matter. If someone needed help, they knew they could count on Elizabeth.”

My grandmother passed away last week. She was 95yo + had lived independently in Bloomfield NJ till 94yo. Thank u @GovMurphy for including her in the eulogy part of your daily press conf as it shines a light on personalities of the ppl lost during #Covid_19 – not just a statistic pic.twitter.com/MjY20YDxGU

Former Gov. Christie named to Pacira’s board of directors