Home Lifestyle Food for the hungry: How industry, labor and government are stepping up...
Facebook
Twitter
Linkedin 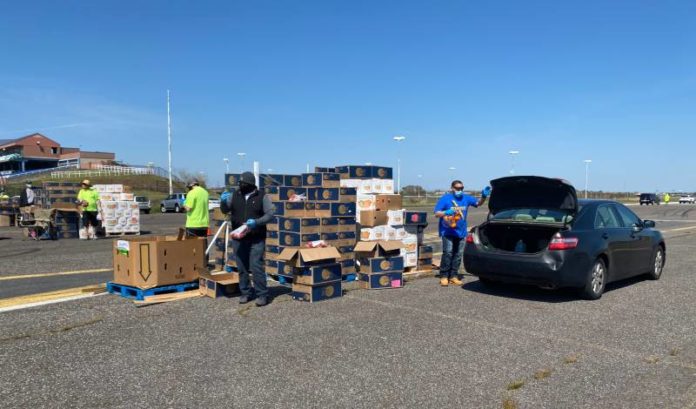 Joe Jingoli said he was tired of seeing of how COVID-19 was punishing the residents of Atlantic City, an area he has spent a lifetime trying to build up.

Most of all, Jingoli said he was tired of being on the sidelines. He wanted to do something.

A few weeks ago, the noted philanthropist who runs his own construction company and is one of the owners of the Hard Rock Hotel & Casino Atlantic City, jumped into action.

Jingoli reached out to Gov. Phil Murphy and first lady Tammy Murphy with a plan: Let’s use money from the Community Reinvestment Development Authority — better known as the CRDA — combined with private donations to provide meal kits for thousands of residents through the Community Food Bank of New Jersey, he said.

The goal, Jingoli said, is not only to provide two weeks’ worth of food — but to show how industry, government and labor can work together and create a model that can be replicated across the state and around the nation.

The plan, which was put into play for the first time May 14, will have its second distribution this Thursday at Bader Field, better known as the former Atlantic City Municipal Airport.

“I spent eight weeks being sad,” Jingoli told ROI-NJ. “We had to do something.

“I reached out to the governor and the first lady and said, ‘If we can put up some money, could we tap into CRDA?’” he said. “The way I look at it, that was money that those workers had helped us make, because CRDA is funded by revenue from the casinos. I said, ‘Let’s take that money and let’s feed the people with it for as long as we have to.’

“The governor and the first lady were on board from the start. They said, ‘Whatever you need.’”

A coalition was quickly established. Jingoli’s partners at the Hard Rock, Jack Morris and Jim Allen, were in. As were other casinos, including Resorts. And then there was labor: Bob McDevitt, the head of UNITE HERE Local 54, and Charlie Wowkanech, the leader of the New Jersey chapter of the AFL-CIO, contributed both money and volunteers to help organize the distribution.

All told, more than $150,000 of organization and personal funds were contributed to the cause.

CRDA took over from there.

Rosa Farias, the deputy executive director of CRDA, said the project fits the organization’s mission — a mission that often is misunderstood.

“Given the state of emergency had shuttered the casinos, it only makes sense that we would turn to help the communities that had been impacted.”

Farias helped the Community Food Bank of New Jersey create an initiative that made sense. It was quickly approved by the CRDA board.

“There had been a huge increase in the number of people who were accessing the local food pantries,” she said. “This is a way we can help take pressure off of them.”

Here’s how it works. Those in need can register for the food distribution. Every two weeks, families can get two boxes of meal kits — with each box including enough food for 12 meals. The boxes will be loaded into cars at Bader Field.

Farias said 2,250 families can be served during each outing. More than 20,000 casino workers have been furloughed.

The effort will not feed all of the hungry in the area, Farias said. But it can help make a significant dent.

“It’s no different than most of the social services challenges on the ground,” she said. “Part of it is setting the expectation. We understand the need. And we’re committed to trying to mitigate it as much as possible. I don’t think that, realistically, you’re going to find one initiative that wipes out the need of any, any social challenge.

“But I will say that there is no other distribution out there like that right now.”

Farias said the groups expect nonregistered folks to show up. And she expects some to show up on foot — or in an Uber. The need is that great, she said.

“We are looking to find solutions,” she said. “And we’ll tell everyone where there are other options available to them.

“A big part of this is finding new ways to collaborate with others who have the same mission.”

The state was eager to do its part, too.

Lt. Gov. Sheila Oliver, who also serves as the commissioner of the Department of Community Affairs, was there on the first distribution day.

“Gov. Murphy and I recognize the severe economic impact that the coronavirus pandemic is having on New Jersey families and their ability to put food on the table,” she said. “We are pleased to see CRDA step up to help address this public health emergency and appreciate that the private sector, the city of Atlantic City, nonprofit groups and labor organizations are all collaborating to provide critical food assistance to Atlantic City residents and casino workers.”

The program has enough funding to last through July. Jingoli, who made a significant personal contribution, knows the need will last much longer than that. He’s prepared to do whatever is necessary to keep it going. And he hopes he can get others to join the cause.

Giving, however, begins at home.

“Social responsibility is a key tenet of what we do,” he said. “We need to really look at that and say, 1) We have a responsibility, so let’s see how we take care of these people; and 2) It’s going to be awhile.

“Let’s say we open back up tomorrow. We’re not just going to fill up the building overnight. There’s going to be a certain amount of our employees who are not going to be able to come back for a while. And you know, in our particular industry, they are very close to the poverty line anyway. We have to do our part.”

Jingoli has been doing his part for some time. His construction company has been a leader at hiring, mentoring and training local residents — preparing them for solid careers in the trades. His FARM team has a long history of helping those in recovery find their way back into society.

The rapid decline of the social fabric of places such as Atlantic City has surprised many, but not him.

“So, we had 3% unemployment before this: How many of those were a couple of paychecks from the poverty line?” he asked, then answered. “Maybe we were just masking some of the problems that existed underneath, problems that have now easily bubbled to the surface.

“Our societal model has proven to have a glass jaw. That’s something we have to look at.”

The solutions, he said, need to come from more than just government.

“It’s an opportunity here for government, industry and organized labor to really come together, because we’re going to have to work our way out of this,” he said.

And he stresses that individuals need to start the process.

Jingoli is proud of the fact that so many of the leaders in the Atlantic City area came together on this project. He wants to see others in other areas do it, too. He feels there is a sense of responsibility for those who can give back to do so.

It’s a feeling, he said, he’s known for some time.

“I grew up with Charlie Wowkanech and Bobby McDevitt,” he said. “We’ve known each other since we were kids. And, you know, we always look back and laugh and say, ‘When we were kids, we said those so-and-sos need to do something.

“Now, we’re those so-and-sos. And we’re doing something.”

Chick-fil-A opening in Eatontown this week