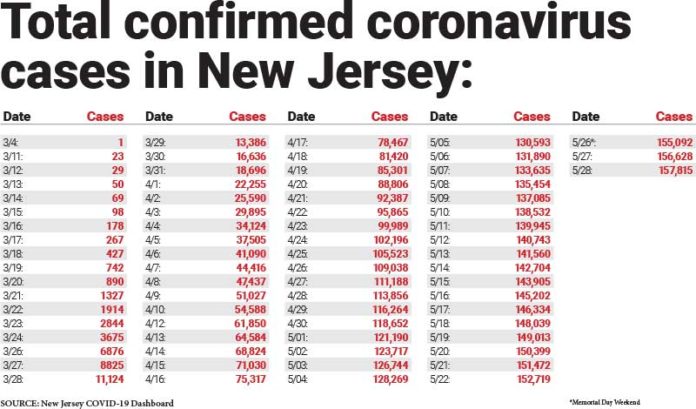 Gov. Phil Murphy acknowledged the guidelines provided for school districts regarding graduations was short on one element: How many people will be allowed to attend outdoor gatherings on July 6.

“We know folks are going to need to know what the maximum is going to look like if you’ve got a high school that’s very large — you need to know if you can do it one ceremony versus multiple,” he said. “We promise to give folks some notice, but on today — May 28 — I’m not prepared to give you notice on what it should look like on July 6. But we have promised to give you notice ahead of time.”

He also said more guidance on retail is coming.

Murphy, at his daily COVID-19 briefing Thursday, promised some more information on reopenings Friday. He hedged on how much detail.

“We will begin I think, with a fair amount of specificity in some cases and, in other cases, directionally, pointing folks as to where we think we can be reasonably headed, particularly over the next 2-3 weeks,” he said.

Murphy said using the number of cases as a barometer is challenging, since the state has increased its testing capacity so much. He was heartened by the fact the positivity rate of testing — a percentage that had been in the 40s during the peak — was at just 6%.

The hospital numbers, as of 10 p.m. Wednesday night:

New Jersey was one of a number of states that was granted a Title 32 extension, which is federal funding of the National Guard. Murphy said it will last into August.

“That’s a big game-changer for us,” he said.

New Jersey uses the National Guard in a variety of ways, including help at long-term care facilities and FEMA testing sites.

“We have them stretched out up and down the state,” he said.

State Police Superintendent Col. Pat. Callahan said — for the first time during COVID-19 — the state had zero compliance issues on the overnight.

Murphy on businesses planning to open in protest — and defiance — of his executive orders.

For every one owner who wants to do X, there are gazillion multiples of those who are doing Y and doing the right thing. I hope folks will understand the rationale — the intensity of the potential for infection indoors. And the steps that have to be taken. I would say to folks, ‘You’re playing with fire.’”

Cooper to announce $2B expansion in Camden today