Gov. Phil Murphy tweeted Sunday afternoon that the state was “closer” to entering Stage Two of his restart and recovery program — saying he’ll an “important announcement” at 2:30 p.m. Monday.

Stage Two — according to the “Road Back” plan Murphy released May 18 — is a time when more work activities are allowed at physical locations if they adhere to safeguarding and modification guidelines.

“Work activities to be phased-in over the course of Stage Two may include expanded retail, safeguarded restaurants with outdoor seating, limited personal care and possibly indoor dining, museums and libraries, all with significantly reduced capacity,” the governor’s release said.

In addition, it said some personal care services (think hair, nails) may be provided on a limited basis.

Thanks to your hard work, we’ve flattened the curve of #COVID19 in New Jersey and are now closer to Stage Two.

Join me live tomorrow at 2:30 PM for an important announcement.

Earlier Sunday, Murphy told a South Jersey radio station that he was hoping to reopen casinos by the July Fourth weekend. The restaurant industry, meanwhile, has been pushing for a Friday opening. 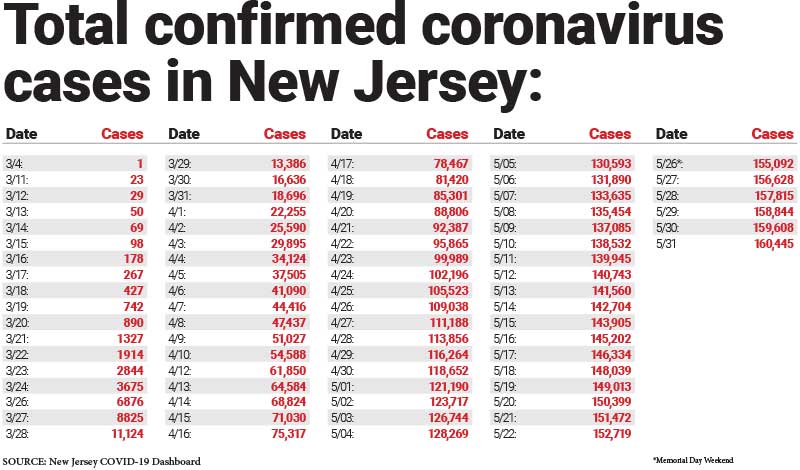 But, if the numbers reported this weekend are close to the actual count, New Jersey will have plenty to celebrate.

The number of people hospitalized fell under 2,500 for the first time, reported as 2,469 on Sunday afternoon — a supposed measure of the state at 10 p.m. on Saturday night.

The numbers should shake out in the next day or two, but it appears the state is continuing to make dramatic decreases in its three most important hospital metrics.