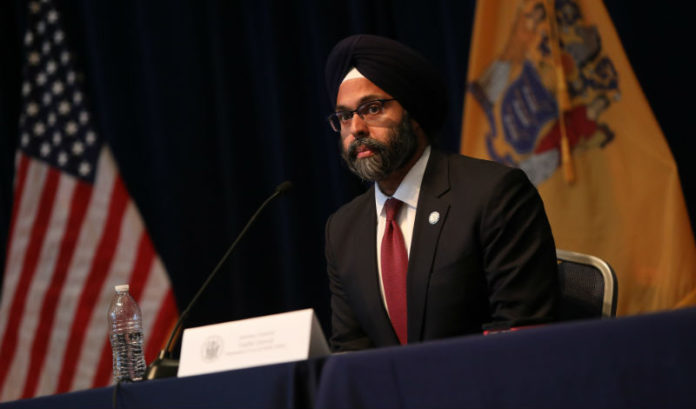 New Jersey Attorney General Gurbir Grewal discussed five initiatives — including the licensing of every law enforcement officer in the state — in an effort to improve relations between law enforcement and the communities they serve.

Grewal, speaking at Gov. Phil Murphy’s daily COVID-19 briefing Tuesday, said the initiatives were begun before the death of George Floyd during an arrest by Minneapolis police sparked worldwide protests and discussions of race relations.

“Mr. Floyd’s death reminds us that our country has a long way to go,” Grewal said. “Not only in healing our nation’s racial divides, but also in addressing the systemic and implicit biases that affect all Americans.

“And so, to the thousands of New Jerseyans who assembled peacefully this week, let me be clear: We hear you. We see you. We respect you. We share your anger and we share your commitment to change. And, at the Attorney General’s Office, we’ve been hard at work to make that change a reality.”

Grewal noted that, last December, the state launched a groundbreaking project known as the Excellence in Policing Initiative.

“It’s a sweeping set of policing reforms designed to promote the culture of professionalism, accountability and transparency that are the hallmarks of New Jersey’s best police departments,” he said.

He then discussed five of its initiatives:

Grewal said the state is launching a pilot program to expand Crisis Intervention Team, or CIT, training across the state. He said CIT is an intensive and collaborative training that brings together law enforcement officers, mental health professionals and other stakeholders — intended to give them the knowledge and the skills they need to respond to an individual and psychiatric crisis in a way that minimizes the potential for injury.

“Experts agree that this best-in-class training is one of the most effective ways to reduce use of force incidents,” he said.

The state is launching a pilot program involving police departments in Paterson, Trenton, Atlantic City and Millville — as well as the state troopers assigned to the State House complex security unit. Grewal said he hopes to take the program statewide.

“As chair of the (Police Training Commission), I will vote in favor of this recommendation because, just as we license doctors, nurses, lawyers (and) hundreds of other professions, we must ensure that all officers meet a baseline level of professionalism,” he said. “And we must ensure that those who cannot meet this standard can’t work in New Jersey.”

Grewal said details of the program need to be worked out.

“As far as what it looks like — annual training, annual renewal — what the process looks like, that would be one that we would work with the unions (and) with other law enforcement leaders on,” he said.

“So, I couldn’t give you a timeframe, but it is something that we are fast moving toward.”

Grewal said such a program already exists in more than 40 states.

“While I’m proud that we are at the forefront of so many different policing reforms and efforts, this is one where we lag behind,” he said.

Grewal said the state is expanding its statewide use-of-force database. It began in December with a database in six towns. By July 1, Grewal said the state will begin opening up the database to police departments across the state, so they can report and more effectively track the use of force by officers across New Jersey.

Grewal said the policy, which was last updated in 2000, will be updated no later than the end of the year.

“We’ll be consulting with a wide range of stakeholders, including civil rights leaders, police unions, religious leaders, victims, advocates and community members to ensure that our policy reflects the values of New Jersey,” he said. “We’ll be drawing on data collected through our new use-of-force database.”

Grewal said the state intends to build an incident response team in the Division on Civil Rights. He called it a team of community relations specialists, similar to the one that existed in the U.S. Department of Justice under President Barack Obama. They will be deployed to local jurisdictions following a major civil rights incident.

“They serve a vital role in diffusing tension and healing a community after a moment of collective trauma,” he said.

Grewal said all of these actions are necessary to build better communities.

“There is only one way to build trust between law enforcement and the community — that’s by working at it day after day, year after year, in church basements, in school gymnasiums, during good times and bad,” he said. “It’s that ongoing, persistent effort … that keeps New Jersey safe during our most perilous moments. And it helps us avoid the worst of what we’ve seen in other states.

Grewal also reiterated that the decision to do this was not spurred by recent events.

“To be clear, we began planning all of these programs long before this week’s protests and we’ll continue them long after the protests end,” he said. “We’re in this for the long haul. Not because it’s popular, not because it’s easy, but because it is the right thing to do.”

That, he said, was never so clear as the day he saw Floyd’s murder.

Not as easy as ABC: Ex-state attorney, now with CSG, explains...

Wainer Apter expected to be nominated to serve on N.J. Supreme...