Gov. Phil Murphy, in a rare but powerful rebuke of a president he has found much common ground with during the COVID-19 pandemic, called President Donald Trump’s action to clear a Washington, D.C., park of protestors “disgraceful.”

Murphy, speaking at his daily COVID-19 briefing Tuesday, was asked about the photo op Trump held at St. John’s Church in Washington on Monday — for which Trump needed to clear a path from the White House.

“The notion of using of tear gas or smoke devices or rubber bullets on peaceful protesters in exchange for a photo op is disgraceful,” Murphy said.

Murphy has generally resisted criticizing Trump during the pandemic — an effort many believe has led to the state getting a lot of federal assistance, including money, testing sites and medical equipment. Murphy reiterated that Tuesday.

“I have said two things consistently about the Trump administration, and I will stick with them,” he said. “We’ve found a lot of common ground, particularly on ventilators, bed capacity, testing, etc. We’re grateful for that.

“I’ve also said, secondly, I don’t think the president pulls his punches, and I can guarantee you I don’t pull my punches.”

Murphy also was asked if troops from New Jersey’s National Guard — which were called to Washington — took part in the clearing. He said they were not — and that they’re not going to D.C. for police action.

“It is explicitly to protect federal buildings and monuments,” Murphy said. “I can with certainty that they were not part of that yesterday.”

Other notes from Tuesday’s briefing:

Murphy was asked about allowing restaurants to use parking lots and other non-traditional eating areas to serve customers.

“We like the idea of being creative on outdoor space — whether that’s a parking lot, a piece of a wide sidewalk, a space between buildings, perhaps, that may not otherwise (been used),” he said.

“Outdoors, this virus has a lot less veracity and teeth than it does indoors.”

Because each scenario would be unique, Murphy said any ruling on that would need to come from local officials. 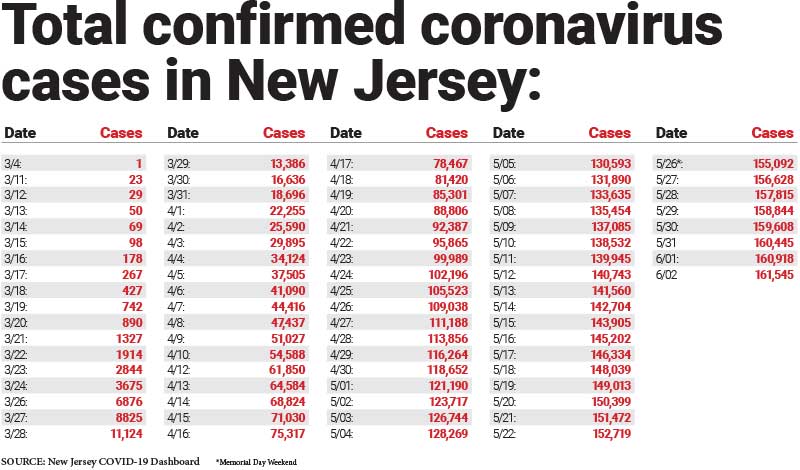 Murphy said the number of patients on ventilators (459) is below 500 for the fourth consecutive day.

Other hospital numbers, as of 10 p.m. Monday night:

Murphy announced there were 708 additional COVID-19 cases Tuesday, raising the state total to 161,545. There also were 51 additional fatalities, raising that total to 11,770.

Murphy on circumstances when New Jersey’s National Guard troops would be called in to assist with crowd control at demonstrations.

Morristown Medical Center ranked No. 3 in country for best nursing...