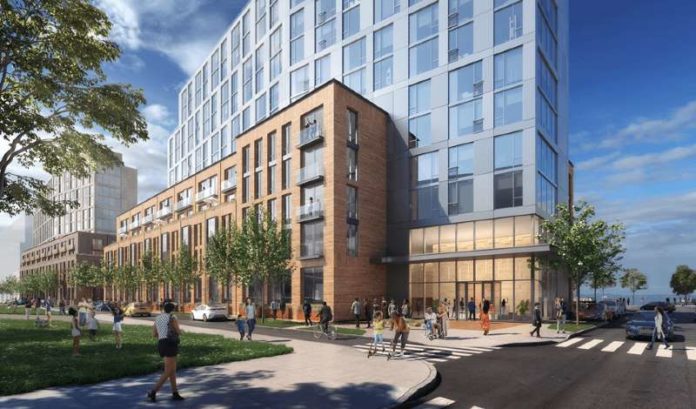 It’s easy to talk about the numbers: How Jersey City paid $100 million for a 100-acre site on the Hackensack River that the city intends to make the centerpiece of its revitalization efforts on the west side.

When Mayor Steve Fulop talks about Bayfront — what is planned to be the largest mixed-income housing development in the tri-state area — he likes to talk about the actual number of affordable units that will be a part of it: 35% of the planned 8,000 units.

“This will be the largest affordable housing set-aside requirement of any private mixed-income community of this size in the country,” Fulop said. “We don’t know of any that is breaking ground larger, and the affordable units will be truly affordable.

“I hope with this project Jersey City can demonstrate to the country what type of development is possible when we don’t let the typical boundaries limit us. We made a $100 million bet on affordable housing, and it looks like this will pay off huge, both economically for current taxpayers and future residents.”

Fulop, the Jersey City Redevelopment Agency and the Department of Housing, Economic Development & Commerce came together Tuesday to announce an agreement for construction of the first phase.

The two selected developers will pay a total of $26 million to develop this first phase, which consists of the development of four parcels on 16 acres. BRP will build 552 units on its two lots, including 193 affordable units. Pennrose/Omni is responsible for 540 units, 189 of which will be affordable housing.

The normal set-aside for affordable is just 5%.

Jersey City officials said they expect to break ground on the infrastructure work for Bayfront in the fall.

The Rev. Laurie Wurm of Jersey City Together said the announcement represents a huge step forward.

“These initial proposals will create a model development designed for people all across Jersey City, with more than 400 units of affordable housing at a range of incomes, the vast majority of which is at 60% of the area median income or below,” she said.

“None of this would have been possible without the persistent organizing of faith leaders and residents for decades, who fought to clean up the site and then to ensure it would be an inclusive opportunity for the city as a whole. In the midst of several serious crises, we must and will continue to build for a better future in our city and region.”

Jersey City officials said Bayfront is designed to maximize the economic benefits to the city and its taxpayers while prioritizing affordable housing, localized hiring opportunities during and after construction, and sustainable “green” development.

“Through this redevelopment project, we are demonstrating our continued commitment to our more vulnerable residents who are among the hardest hit by this pandemic,” Fulop said.

Councilman-at-Large Daniel Rivera, who also serves as the chair of the JCRA, said Bayfront will bring significant housing opportunities to those who need it most.

“This has been a thoughtful, collaborative effort involving a lot of moving parts,” he said. “But we never lost sight of the fact that this is a critical time in the city’s history, and so we need to ensure we chose the right partners to carry out these plans for the betterment of the community as a whole.”

The redevelopment project is intended to create opportunities for local residents and local businesses while ensuring that minority- and women-owned businesses are given an opportunity to participate in the project. BRP is 100% minority owned.

Jacob Fisher, regional vice president at Pennrose, said the firm is looking forward to working collaboratively with local officials and Omni to transform an underutilized site into a vibrant new mixed-use community.

“Featuring green design, top-notch amenities and ample outdoor and community spaces, the plans for the Bayfront development will have long-term, positive impacts on the entire neighborhood,” he said.

Fulop, meanwhile, said the announcement shows Jersey City is ready to move ahead.

“While many municipalities are paralyzed by the pandemic, today’s announcement speaks to the fact that, here in Jersey City, we continue to proactively work to prepare for a post-pandemic world,” he said.