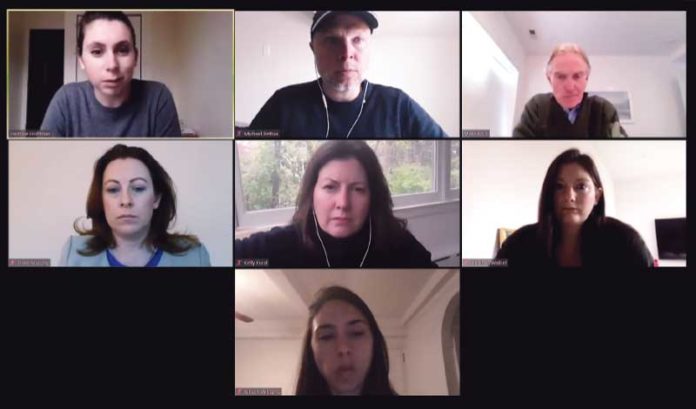 The first pitch came from Clare Murphy, president of Princeton-based Layer Metrics, which has a hardware and software solution for controlling quality and reducing waste in precision 3D metal printing. Murphy explained that 3D printing with metal is an unreliable and extraordinarily complex process that produces much waste.

The company’s sensor system captures data during the build process to alert the user when problems occur and allow the user to take corrective action, thereby eliminating waste. “The industry is craving quality control to such an extent that the U.S. Air Force is hosting an Olympics to address this challenge,” Murphy said.

She added that Layer Metrics is working with Oak Ridge National Laboratory, in Tennessee, to validate its system. The company’s customers will be 3D printer manufacturers, a $2.5 billion market.

Buckley asked Murphy to clarify the customer need, as she wasn’t familiar with this market. Murphy said that, right now, there is a high “scrap rate” in metal printing, although much of what’s being done is prototyping. She added that, by significantly reducing the scrap rate, Layer Metrics would both enable industry adoption of metal 3D printing and reduce the expense for end users.

Heather Waibel, founder of Welnys, based in Jersey City, presented next. The company has a marketplace of more than 5,000 in-person wellness providers, which it offers to enterprises for inclusion in their benefit packages. In response to COVID-19 and the need for remote work, the startup has also begun offering Welnys TV, which features video programs on hundreds of topics that employees can stream on demand.

“Eighty percent of mid- to large-sized companies today offer workplace wellness programs for their employees, but they don’t have an effective way of doing this,” Waibel told the group. “They really struggle to find quality vendors, they typically aren’t tracking the utilization of their programs and they have no way to manage this centrally.”

Human resources staff might not know what’s going on in remote offices or be able to figure out which employees are utilizing the services, she said.

“As a marketplace, we really can offer any kind of service,” Waibel noted. “And, finally, we give our customers access to our software platform, and that platform helps them to track and measure their programs. It provides back utilization metrics to the employer.”

The startup’s competition was on Williams’ mind, as she’s familiar with the human resources space, and Waibel acknowledged that there are many wellness companies out there.

“What we are is an aggregator,” she said. “So, because of our marketplace model, we take all of those companies that fall within our niche and we roll them up under one solution.”

What makes Welnys different, Waibel said, is that enterprises won’t have to secure a new vendor for their mental wellness services, their meditation app and their yoga instruction. They can just work with Welnys.

The final pitch of the show came from Michael Bettua, co-founder, chair and CEO of Volan Technology, in Hoboken, which offers an artificial intelligence precise positioning system that uses a neural mesh network. The system locates people inside buildings during emergencies.

Bettua noted that people typically spend 90% of their time indoors, and GPS is useless for locating them inside most office buildings, schools or malls. The company set out to do “accurate, precise micro-location tracking of thousands of individuals on these big sites, and to set up geofences that can track when people enter and leave a room or enter a classroom.”

The company has also pivoted in response to the COVID-19 crisis, as the same technology can be used for contact tracing. The implementation of contact tracing has been touted as necessary for opening the economy and enabling people to return to normal life after COVID-19.

Kolb asked what the low-hanging fruit was for Volan, and Bettua replied that his company is going after “a much better, location-based panic button system that doesn’t rely on anybody’s phone.”

It also doesn’t rely on Wi-Fi, and has its own batteries, he said. So, technically, if there’s a power outage, the system could still work.

The company’s private cloud identity system would allow housekeepers in hotels, teachers in schools and universities and home workers some assurance of safety, he said. The system can be the “eyes and ears” of establishments like hotels and universities, “giving people the ability to report an emergency, and giving responders a whole new layer of information on how to respond.”

Why High Schools of the Future initiative by LSC, BofA will...