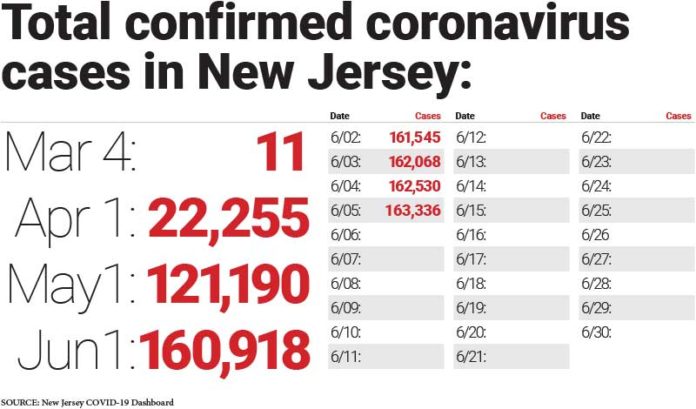 When Gov. Phil Murphy announced expanded outdoor dining would be allowed starting June 15, many wondered why the date couldn’t be moved to Friday, June 12 — to give owners an additional weekend of sales.

Murphy said he has no interest in moving up the date, despite the fact that COVID-19 health metrics are quickly trending downward and the dozens of daily protests — which have yet to lead to a massive increase in cases — seemingly are showing larger-scale gatherings can work.

Murphy said his team had many discussions between June 12 and June 15 — and acknowledged the New Jersey Restaurant & Hospitality Association pushed for this weekend.

“We put a date in that we felt was the most responsible on the one hand and also gave them the runway to get their staffing and protocols in place given the guidance that (has been put out), and that’s the day we’re sticking with,” he said.

Other news from today’s briefing:

MVC head Sue Fulton said face coverings will be required at all agencies. More so, she said MVC has changed the nature of some of its agencies.

Fulton said the setup, which is used in many other states, will lead to faster service. Fulton also said the state will add more road test locations — and testers — which she said will enable the MVC to clear a three-month backlog in 60 days.

The governor has done well over 100 press briefings and interviews since the pandemic struck, but this might be the best question:

Elise Young of Bloomberg, after paraphrasing what President Donald Trump said earlier in the day about George Floyd and the economy:

Are you concerned about the president’s mental state and his ability to do his job?”

Murphy, on nomination of Fabiana Pierre-Louis as the first black woman to be nominated for the state Supreme Court.

We don’t set out to make history, we set out to make sure that the cause of justice will be served. It’s just all the better when that effort leads to a historic choice. And, Fabiana Pierre-Louis will be a standout justice.”