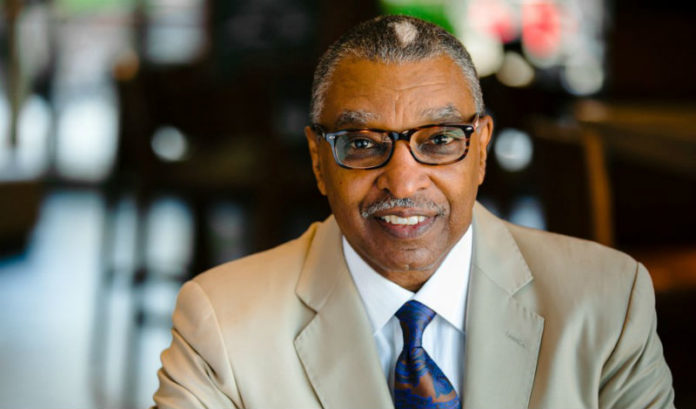 Top leaders always have been interested in what the Rev. Dr. DeForest “Buster” Soaries has to say.

It’s one of the reasons why Christie Whitman selected him to be the first African American secretary of state in New Jersey, why Coretta Scott King selected him to be a keynote speaker at a Martin Luther King celebration and why Speaker of the House Paul Ryan asked him to speak to a bipartisan committee in Congress following Freddie Gray’s death in police custody in Baltimore.

And, of course, it’s why so many for so many years have traveled to the First Baptist Church of Lincoln Gardens in Franklin Township, where he has served as pastor for three decades.

So, as we neared the end of a tumultuous week in the country, we went looking for someone to provide perspective on the events that have followed the death of George Floyd during an arrest in Minneapolis. We caught up with Soaries. We weren’t disappointed.

Soaries explained why he thought this incident of police brutality has struck a greater chord than others (he compared it to a Civil Rights-era event), why he feels it’s important to copy what’s working rather than criticize what isn’t (wait until you hear about what they do in Las Vegas), and what the state and the country need to do to capitalize on this moment (it’s all about relationships), among other things.

Like so many before us, we realized the best thing is to just let Soaries talk. Here goes:

On why this case has captivated the nation

“It obviously has lit a spark. I think it has been for many people what the 1963 Birmingham, Alabama, televised atrocities were to that generation. The Civil Rights movement had really a pivotal moment when (Birmingham Commissioner of Public Safety) Bull Conner unleashed the fire hoses and the dogs on black protesters on national television.

“I think this issue of police using excessive force disproportionately toward African Americans went to a different level of credibility when they watched this police officer with his knee on George Floyd. The polls indicate that twice as many whites now believed that blacks suffer disproportionately.”

“The way you solve problems is by studying success. Right now, we spend almost all of our efforts and resources on studying what went wrong. And, while that’s important, we need to figure out what’s going right.

“And, when you study what’s going right, and when you see the kind of police community relations that have produced phenomenal results — whether it’s incidental or whether it’s institutional — you can dissect that, extract the principles, put it into some kind of training format and incentivize cities to replicate it.

“If you want to build a good school, you don’t go to failing schools, you go to model schools. If you’ve got a school in the middle of the ghetto that’s graduating 98% of their kids, you want to study that and see how much of that you can spread.”

On where it’s working

“There are examples everywhere. Just (Tuesday) in Fayetteville, North Carolina, there were protesters marching down the highway, about to be cut off by police marching toward them. And, when the police got about 10 yards away from the protestors, the police took a knee before the protesters. The protestors were so shocked, they knelt down, too. After a few moments, they came together.

“Someone ought to go and talk to the police: What was the process that led to this? How did the police make that decision? Who said what to whom? Let’s find out.

“In Las Vegas, we’ve got a group of ex-convicts that are being mentored by the officers that arrested them and sent them to jail. When they come out, the officers become their mentors.

On going beyond the rhetoric

“I think the country, with all of this new awareness and concern and commitment to justice, needs to identify what it looks like. What does success look like after you do the platitudes and the commitments and the kumbaya? What, concretely, does justice look like? I think that’s where you start.

“It is an opportunity for change, but I think that can only begin with being able to clearly identify and define what success looks like.”

On working with law enforcement fairly

“There’s some practical things you do. For instance, in New Jersey today, a police officer can be fired for misconduct and go over to the next town and get a job. There needs to be some kind of database to prevent this.

“We have to protect the people who are protecting us and not go so far to the other side; then, you can’t recruit anybody to do the job.”

On trust and relationships

“There’s no training, there’s no money, there’s no program that’s a substitute for relationships, because people are going to do dumb things, period. You can have an absolutely pristine department and there’s going to be some police officer who is going to think a guy has a gun and shoot him, period. What the relationship does is, it protects you from an assumption that can’t countered by the benefit of the doubt.

“In Franklin, we’ve had incidents between blacks and the police, but we’ve never had an uprising, because we have relationships.

“I can pick up the phone and call the mayor of New Brunswick and say: ‘One of my members says you have a cop that’s crazy.’ And, because we have a relationship, he will say to me, ‘I believe you and I’ll look into it.’ And I’ll also pick up the phone and say: ‘There’s some people coming to see you. They’re black, they’re angry and they’re crazy. They’re going to mention my name, but I don’t take them seriously. And you shouldn’t either.’”

“Relationships are the only way to protect us from knee-jerk reactions every time somebody loses their temper or is suspicious of somebody else. The relationship doesn’t prevent bad things from happening, the relationship prevents an explosion in response to the bad thing that happens.

“It needs to be a genuine relationship, where people are willing to listen to each other and allow others to teach them what they don’t know.

“At the end of the day, if we’re going to win anything in the human space, the foundation of that victory has to be a relationship.”

Riker Danzig feels it has every issue of cannabis covered with...