Gov. Phil Murphy defended his attendance at two protests this past weekend — even though he violated his own executive orders on social distancing in the process.

The governor is increasingly coming under scrutiny for allowing these protests — which often involve hundreds, if not thousands of people shoulder-to-shoulder — while still holding firm on his decision to keep many businesses closed.

Murphy, at his daily COVID-19 briefing Monday, essentially said the historical nature of the event takes precedence over social distancing rules — while acknowledging it would be difficult to enforce those rules during protests.

“This is a moment in time perhaps unlike any in our nation’s history,” he said. “There is an overwhelming amount of passion and anger and it’s all been incredibly peaceful.

“I can’t imagine what it would look like if we said to people, ‘You have to stay in, you have to ignore systemic racism, I’m sorry — just ignore it, just stay inside, you can’t go out and voice your anger — your rightful anger. I can’t imagine what that looks like as it relates to public safety.”

Murphy said the protests regarding systemic racism and police brutality seem different. He said he hopes they will lead to significant change rather than disappearing from public consciousness.

“I do think this is an inflection point; I do believe this does feel differently this time,” he said.

He said it’s up to the public to make sure it stays that way.

Murphy said he has not seen the release of the footage of the altercation that led to the shooting and killing of Maurice Gordon by a New Jersey State Police trooper during a stop on the Garden State Parkway.

Murphy said he is proud of the impartiality his administration has shown during the administration, as it is required to by law. He said the case will go to a grand jury.

“And, to repeat what I’ve said before — under law, I cannot dictate the process and outcome of the criminal investigation. Doing so would no longer make the attorney general an ‘independent prosecutor,’ undermining both the law and the independence that is a necessary part of our criminal justice system.” 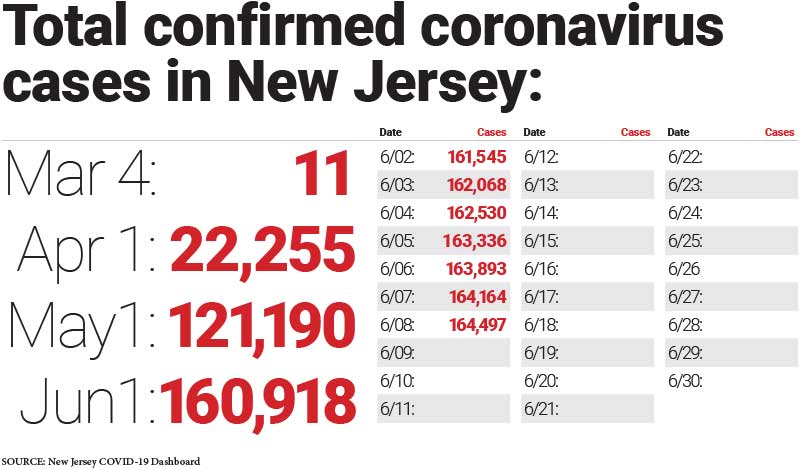 The number of patients in intensive care dropped below 500 for the first time since the state began releasing the data, as just 498 patients were so classified at 10 p.m. Sunday night.

Other hospital numbers, as of 10 p.m. Sunday:

Murphy said municipal and private-club swimming pools will be able to reopen June 22. Murphy said full guidance relating to the procedures and protocols from the Department of Health will be released Tuesday.

Murphy said the Department of Health will be issuing the guidance later Monday that will take camps, including municipal recreation programs and summer educational programming, through the reopening process.

We are the densest state in the nation. We also sit in the densest neighborhood in the nation. If you’re going to get one thing right in New Jersey … it’s the ability to move people and things around better — and, now, safely, particularly with this pandemic — than any other state in America. And these plans go right at those objectives.”

Murphy announces he will nominate Persichilli for health commissioner