Home Health Care Murphy: Everything on table when it comes to reimagined relationship between police,...
Facebook
Twitter
Linkedin 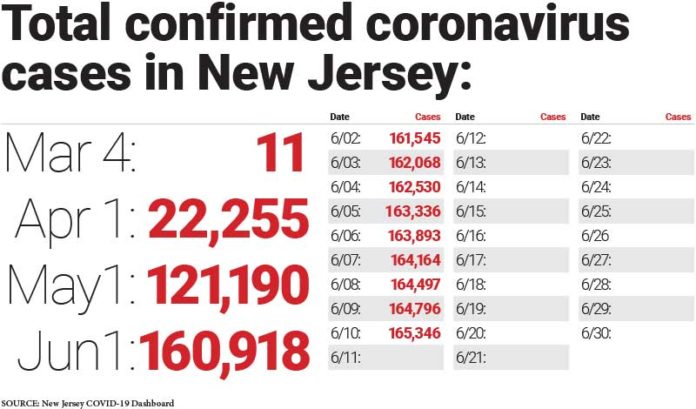 Gov. Phil Murphy said he was not aware of the particulars of the law granting access to discipline records of New York state’s police officers that New York Gov. Andrew Cuomo signed — but said everything is “on the table” when it comes to New Jersey considering a similar law.

The law, which is strongly opposed by police unions, repeals Section 50a, which allowed law-enforcement agencies to keep an officer’s disciplinary record private unless it was ordered by a court to be released. Many states, including New Jersey, have similar laws in place.

“I’m not familiar with the specific steps that Gov. Cuomo has taken, but I think as we reimagine what law enforcement looks like in the relationship between law enforcement and communities and try to get to a place we’ve never been before, I think about everything needs to be on the table and that would include access — and, without committing to it, that’s got to be included for consideration,” Murphy said

Murphy, speaking at his daily COVID-19 briefing, also addressed a state corrections officer being suspended after he took part in a protest that mocked the death of George Floyd.

“The corrections officer was suspended and rightfully so — it’s reprehensible, period,” he said. “There’s a process underway, and, beyond that, let’s let the process play out, but (it’s) completely unacceptable and reprehensible.”

On other law and order fronts, State Police Superintendent Col. Pat Callahan said a gathering in Point Pleasant was broken up Tuesday night without incident.

Murphy and Callahan continue to be impressed by the peaceful nature of New Jersey protests and the willingness to abide by executive orders. 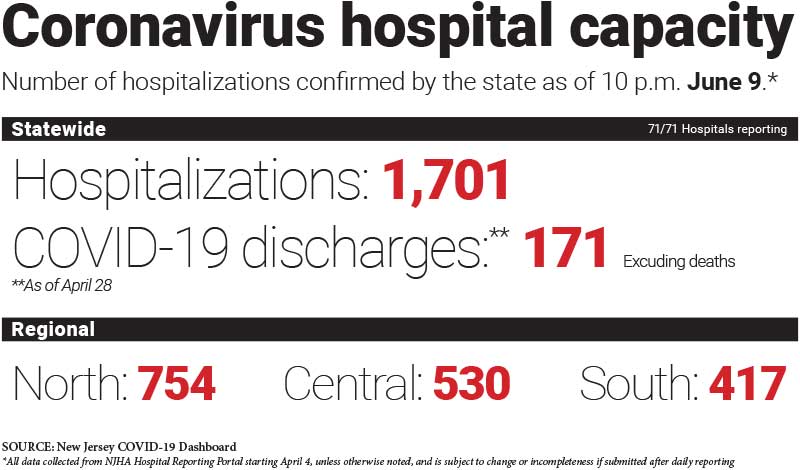 The hospital numbers, as of 10 p.m. Wednesday:

Murphy said the state has 900 existing contract tracers and hopes to have an additional 1,600 by the end of the month — and is preparing to add as many as 4,000 more, as the situation warrants.

Murphy said residents are not required to give information to tracers — and that he understands why some may be reluctant to in an era of large data collections. He said the state is attempting to hire tracers who will live in the communities they will serve — and that the state will launch a public relations campaign stressing the importance, too.

Doing so may result in getting a call from a tracer.

Callahan said the state still distributes all of the PPE it receives, but also acknowledged it needs to create a stockpile so the state would be better prepared should there be a second wave of COVID-19.

Health Commissioner Judith Persichilli said the state is hoping to soon allow visitations to nursing homes, but cautions there still is high risk.

“The disease in nursing homes is still there in most of our facilities,” she said. “So, we have to be extremely vigilant when we put out guidance for visitation. We’re looking at what some other states are doing, we’ve identified some guidelines that we’re just not ready to put out yet, but we will be soon.”

Murphy, aghast at the suggestion the state is lagging behind in the hiring of contract tracers, took a polite shot at the media:

You guys can’t stand success is one observation I’ll make — nothing personal,” he said. “We have the No. 1 per capita testing state in America, we have the among the lowest rates of transmission of any American state, we have a spot positivity rate — and, please God, it stays this way — between 3% and 4%, which means 96-97% percent of the people being tested are negative, and we have 900 people doing contact tracing as we sit here.”

Energy & Utilities
ROI-NJ Staff -
December 1, 2022
We’ll spare you the trash-to-treasure line and just say this: Finding creative ways and new areas to create clean energy will be a key...

State freezes nearly $1B in spending amid COVID-19 uncertainty