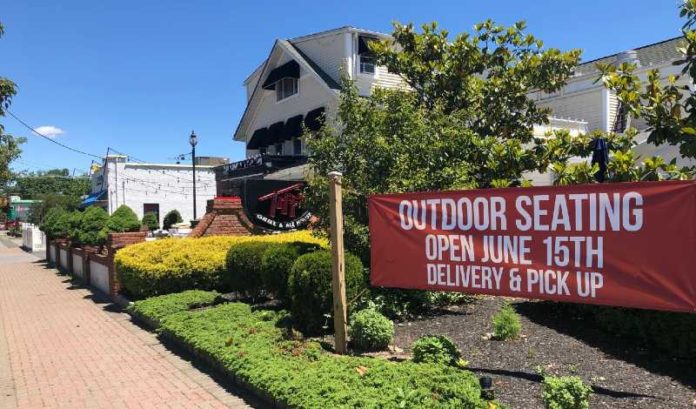 Marilou Halvorsen started to fume during the day Friday, when she saw the picture-perfect weather forecast — the type of weather that would lead to big nights at the restaurants she represents as the head of the New Jersey Restaurant & Hospitality Association.

It got worse that evening, when she heard Gov. Phil Murphy and his wife dined — indoors — with President Donald Trump at his golf club in Bedminster, which would appear to be in direct violation of the governor’s executive orders for the state.

Halvorsen has been around long enough to know folks will look the other way on the governor’s dinner — “The Republicans don’t want to go against the president and the Democrats are still feeling defensive because of the other violation of his executive order” — since politics are politics.

But she said she can’t look past the damage that is being done to her members, as Murphy decided to allow outdoor dining to restart Monday, rather than this past weekend.

“What’s the science behind the 15th?” she said. “Literally, we’re talking three days’ difference, but in the world of weekends in the summer for a restaurant owner, any small business owner, especially on the Shore, it’s astronomical.

“We kept pressing for the 12th just like everybody else did. And were just told, ‘No, it’s the 15th,’ without a reason behind it, other than the science. And I don’t know what that science is.”

Here’s what she does know: Her industry has safety standards as high as any outside of health care — and certainly higher than retail outlets and places of worship.

“I understand the need for people who feel the need to practice their faith, especially in these times,” she said. “But don’t sit there, then, and then say, ‘But restaurants can’t open.’

“If you can open churches, you sure as heck can open a restaurant. The industries that he is allowing to operate indoors do not practice the same safety protocols that a restaurant does. You don’t sit down in a church pew, and, after you get up, it’s going to be as cleaned. And the air is not circulating.

“And, when you go to a food store, pick up a box of Oreos or something and then put it back down, there’s not somebody there cleaning it.

“When you sit down at a table, it’s been clean and sanitized — and the menus have been cleaned, or they’re disposable.”

“We have those measures in place with our reservation systems,” she said. “If you go to a wedding, you know everybody who is sitting at a table and who was sitting at what table next to that table. And you know who the server (was) and every other person who came in contact with the table.

“It’s the same way in restaurants. We know who sat at every table. There are various mechanisms in place that enable us to know that.”

Don’t get her started on casinos, which Murphy has said he likely will open before he allows indoor dining.

Like everyone else, Halvorsen is clamoring for specific numbers — she wants to know what data is being used when the governor continually preaches “data determines dates.”

Halvorsen said she understands indoor dining isn’t for everyone, too.

“If you’re not comfortable, then don’t go,” she said.

She just wants everyone to have the ability to decide for themselves — as they do when they go to a ShopRite, a Lowe’s, a Target or a Walmart.

Especially when there is picture-perfect weather — as there was this weekend.

“You don’t get those days back,” she said.