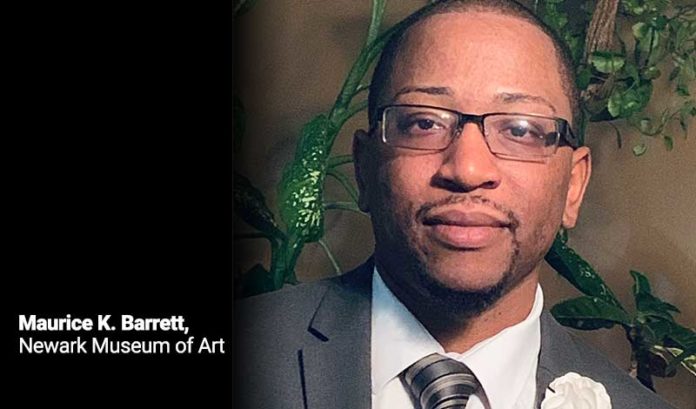 The Newark Museum of Art, ranked 12th among art museums in the United States, announced that it has welcomed Maurice K. Barrett as senior director of human resources. Barrett brings over 15 years of experience and expertise in human resources to his new role.

“We are delighted to welcome Maurice on our team as senior director of human resources,” said Linda C. Harrison, director and CEO of the Newark Museum of Art. “It is an amazing time of transition and growth at the Newark Museum of Art, and Maurice’s extensive knowledge with strategic planning, leadership and change management will be incredibly valuable as we continue our work at the Museum.”

As senior director of human resources, Barrett will manage and guide the overall human resources programs for the museum. The senior director of human resources is responsible for overseeing the museum’s recruitment strategies, diversity and inclusion programs, and payroll processing. He will actively support the Museum’s inclusion-based initiatives in hiring and promoting staff from diverse backgrounds — already a point of pride for a museum with its first African-American CEO and more women in senior leadership than peer institutions. In this position, Barrett will also serve on the leadership team and will provide advice and counsel on best practices for human resources. 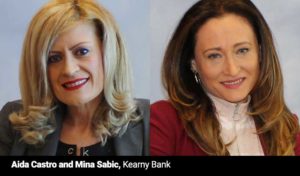 Most recently financial service manager for Spencer Savings, Castro’s more than three decades of banking industry experience were recognized in 2019 by a certificate from the New Jersey Bankers Association. A graduate of the American Institute of Banking, Castro is bilingual. Most recently the Montclair branch’s retail client experience manager, Sabic has more than 15 years of banking industry experience, including eight years spent as a personal banker with Santander Bank. 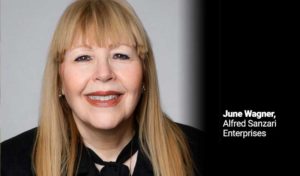 “For over three decades, June’s dedication and tireless hard work have made her an invaluable member of the Sanzari team and someone we consider a member of our extended family,” said David Sanzari, president of Alfred Sanzari Enterprises. “We are very fortunate to have had someone like June on our team for the past 35 years and thank her for her continued contributions to our company.” 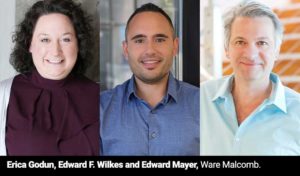 Ware Malcomb, an award-winning international design firm, announced Edward F. Wilkes Jr. has joined the firm as a civil engineering manager in the Newark office. In this role, Wilkes is responsible for the growth and management of civil engineering services for the Northeast market.

Finally, Ware Malcomb announced Edward Mayer has been promoted to principal, architecture, in the New York and Newark offices. In this position, Mayer is responsible for the overall leadership and growth of the Architecture Studios for the Northeast region.

The law firm Bressler, Amery & Ross announced that Lauren Fenton-Valdivia has been named its new chair of the firm’s Diversity & Inclusion Committee.

The law firm also announced that Joseph L. Calabrese has joined the firm as a principal in the Financial Institutions Group in its New York office. At the same time, the firm announced it has hired Megan Cannella as a counsel in the Private Client Practice in its New Jersey office.

Cappola, who been ranked by Chambers USA as one of the state’s leading environmental lawyers, has more than 25 years of experience guiding businesses and developers through complex brownfield and landfill redevelopment projects, land use issues and environmental compliance and permitting. He also has significant experience helping steel and chemical manufacturers comply with federal and state environmental laws. Cappola joins the firm from Wilentz, Goldman & Spitzer, where he was a shareholder. His arrival strengthens Mandelbaum Salsburg’s environmental law practice group, which is co-chaired by members Douglas Eilender and Gordon Duus.

Inkbench, the leading platform for the creation of brand-protected digital communications, announced that it has added three new staff members to help support subscribers and their need to control and collaborate on marketing and brand communications during this unusual time of transformation.

Doyel Ghosh, senior full-stack developer, brings over 12 years of design and application programming experience to Inkbench. She joins the Inkbench development team as a CSM-certified senior software engineer. Santino Valenzuela, senior front-end developer, is a modern wizard with user interface and brings over seven years of experience building responsive websites. He was one of the original designers of the Inkbench Canvas. Stephanie Beighley, creative director, has been defining and developing brand experiences for both clients and agencies throughout her two-decade career. Prior to joining the team, Beighley was an Inkbench power-user, and will bring her skills to helping subscribers with everything from implementation to design direction, as well as being actively involved in crafting the overall user experience.

Meany has spent the past 25 years as managing director for Herbert Mines, where he executed C-suite searches across retail, fashion, wholesale and consumer product industries. He previously worked at Norman Broadbent and Korn Ferry. Throughout his career, he has completed hundreds of C-suite and board searches for many of the top retail brands. Meany is known as a market maker in the retail space with broad experience working with public, private, and private equity-backed clients.

The CoinShares Group, a pioneer in digital asset investing, announced the appointment of Frank Spiteri as chief revenue officer. Spiteri will oversee the group’s exchange traded product business in addition to the group’s broader sales, marketing and research efforts. Spiteri strengthens CoinShares’ position as a leading issuer of innovative, professional investment products that provide investors with exposure to the emerging digital asset class.

The CoinShares family of ETPs, offered under the XBT Provider brand, are currently available for trading throughout Europe on Nasdaq OMX Stockholm, Nordic Growth Market, Deutsche Boerse, and Boerse Stuttgart and are available to customers via their brokerage account.

In Middlesex, some pivots will be permanent — and that’s a...