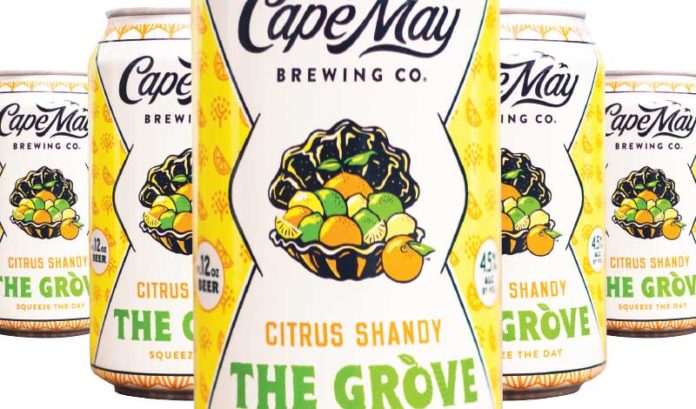 As our state carefully opens up again for business and the impatiently-awaited summer season is on the horizon, one of New Jersey’s treasured microbreweries, Cape May Brewing Co., has proudly announced the release of its citrus shandy, The Grove, adding to its lineup of summer core offerings.

Many of us are longing for those times for recreation outdoors, at the beach and hopefully at reopened bars and restaurants, so it’s nice to know Cape May Brewing is making new products available in 12-ounce cans throughout New Jersey, Pennsylvania and Delaware in time for summer. The Grove was originally conceived as a Tasting Room-only release for the brewery in 2019, with a limited canned offering at the time.

“From the time we released The Grove in the Tasting Room last autumn,” Cape May Brewing Company CEO Ryan Krill said, “we knew we had a hit on our hands. Not only did our fans go crazy for it, but our team down in Cape May absolutely loved and rallied behind this beer. As we sketched out our release schedule for 2020, focusing on wide-release fruit beers during the summer, we knew that The Grove would have a prominent place in that lineup. With its blast of bright citrus flavors, The Grove is the perfect crushable brew for the summer.”

Brewed with orange, lime, tangerine and lemon, The Grove is snappy, bright and ridiculously fresh. Sweet and tart, The Grove has brilliant citrus aromas reminiscent of walking through a citrus grove at harvest.

“The Grove is super refreshing, tart, lightly sweet, with only a delicate beer flavor,” Innovation Director Brian Hink said. “With a light ABV of 4.5%, The Grove is significantly more balanced than some of our other fruit beers, yet also has a brilliant orangey, grapefruity, tangeriney finish.”

The scaled-up version of The Grove is a nice round-out to Cape May Brewing Company’s lineup of summer fruit beers.

“Along with Tan Limes, our Mexican lager with lime and sea salt; our cranberry shandy, The Bog; and our orange IPA, Crushin’ It,” Director of Sales Bill Zaninelli said. “The Grove is a terrific extension to our line of fruit-forward, summer beers. While our rotating IPA series is great for IPA lovers, The Grove is the perfect brew for everyone else.”

Furthermore, says Zaninelli, The Grove will appeal to the seltzer aficionados crowd.

“While the Grove is certainly not a seltzer,” he continued, “drinkers who’ve jumped on the seltzer bandwagon will appreciate the near-absence of beer flavor in The Grove. This brew has only a light malt flavor with little hop bitterness while the citrus and sweet shandy flavors are forward in the flavor profile.”

“Everything about this packaging design communicates the fresh flavors of The Grove,” Marketing Director Alicia Grasso said. “From the overflowing citrus fruits to the colors in the pattern — even the little leaf on the letter O in ‘Grove’ — the 12-ounce can lets prospective customers know that they’re in for a barrage of intense citrus fruit flavors.”

The Grove hit retailers throughout New Jersey at the end of April, throughout the nine easternmost counties of Pennsylvania at the start of May, throughout Delaware in mid-May, and in Cape May Brewing Co.’s Tasting Room at 1288 Hornet Road in the Cape May Airport at the end of May.

Thanks to our friends at Cape May Brewing Co. as they continue to innovate its beverage lineup through such challenging times.

So much of our world has changed since the Covid-19 pandemic has “infected” our daily lives and, as businesses and corporations adapt to these changes in consumer behavior, Wakefern Food Corp. has opened up new positions to create brand strategies and marketing campaigns across all its banners.

Wakefern, the nation’s largest retailer-owned cooperative, with member companies that own and operate supermarkets under the ShopRite, Price Rite Marketplace, The Fresh Grocer, Dearborn Market and Gourmet Garage banners, announced the promotion of Laura Kind to vice president of brand strategy and welcomed Ranjana Choudhry as vice president of advertising and social media.

Kind has quickly built a strong track record since joining Wakefern in December 2018 as director of brand marketing and packaging. She was pivotal in driving the successful design, positioning and launch of Wakefern’s newest own brand offerings, Bowl & Basket and Paperbird.

Choudhry joined Wakefern in March and brings more than 25 years of experience as a global marketing and communications leader to her new role at Wakefern. She will lead the advertising and social media divisions to develop marketing and digital content strategies that harness the brands’ iconic promotions, and also introduce fresh, new campaigns across advertising and digital channels.

Wishing much success to these women as they take on these new roles for Wakefern.

For more information about Wakefern, go to wakefern.com.

Boonton accounting firm offers child care for employees — even during...