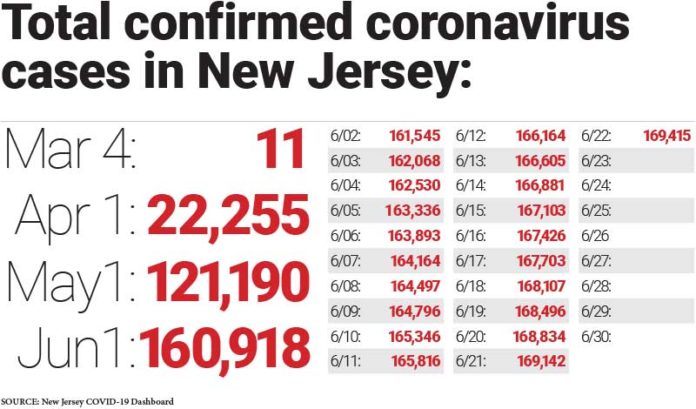 Gov. Phil Murphy was thrilled to announce the state was in stage 2 of its reopening Monday, announcing dates for the resumption of indoor dining, casino, racetracks (all July 2) and a larger maximum for outdoor gatherings (now 250).

Health and safety protocols will be announced in coming days, Murphy said.

But, while Murphy again said the state reserved the right to pull back should numbers spike, he also indicated that he’s hopeful he’ll be able to quickly expand the number of openings — and increase restrictions on areas already opened.

He mentioned capacity for indoor dining and casinos — noting that the maximize size of outdoor gatherings was just increased to 100 two weeks ago, he said.

“As we move forward, we fully anticipate being able to increase the indoor number as we feel it is safe to do so,” he said.

And, while Murphy said he was hopeful for more announcements on museums, he said gyms may be shaping up to present the biggest challenge.

The other challenge: Making sure people comply.

“While this guidance is not yet complete, you should fully expect that they will include mandatory face coverings and masks, and health screenings for all visitors and staff,” he said. “And, you should also expect density limits to ensure social distancing while inside the casinos, among other measures.

“If any visitor refuses to comply with these simple safeguards, you will be escorted out of the casino. We’re not going to tolerate any knuckleheads trying to ruin it for those who wish to enjoy themselves responsibly — especially if those knuckleheads could be spreading COVID-19.”

Murphy said residents have by and large been great at respecting the restrictions. And, while he understands the feeling that perhaps it’s time to cut loose, he said he is a bit disturbed by some videos he’s seen that have shown a lack of social distancing and the wearing of masks.

He promised the state will enforce the rules if people bend them too much.

“Can you blame people for coming out and letting the hair down a little bit?” he asked then answered. “I certainly can’t blame people for doing that. But we are going to have to tighten up; there’s just no other way around it.

“Too many viral videos for my taste over the past 24-48 hours. That’s something that we’ve had private discussions on this morning and something that I think we’re going to have to come back to you on. But folks should know that we can’t look the other way. It’s one thing if it’s a little bit noncompliant, but this stuff is out of bounds.”

The state entered stage 2 of its reopening on a day that saw more positive health data, as the state edged closer to having fewer than 1,000 people hospitalized for COVID-19 for the first time since the number were announced.

Murphy did announce that there were 359 additional cases, raising the state total to 169,415. There were 27 more fatalities, increasing that total to 12,895.

Outside influences: Factors creating need for health care are not always...