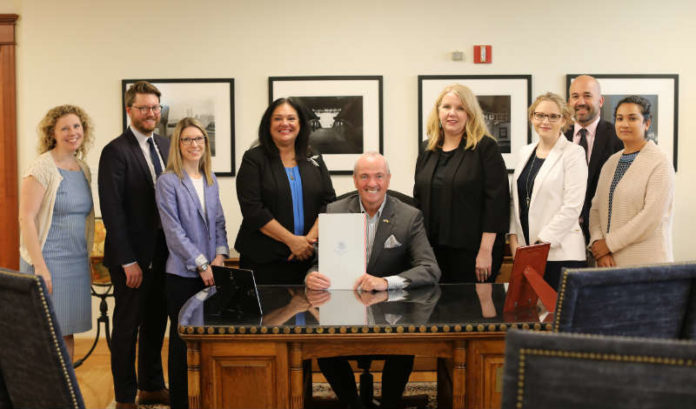 New Jersey essentially avoided the violent protests that impacted so much of the country in the past few weeks. Now, the question is how the state will handle the next national discussion — one that involves the removal of statues.

Of particular note in this state are statues honoring Christopher Columbus — a question a handful of states are grappling with.

And, while Murphy acknowledged that Columbus Day, which falls on Oct. 12 this year, is an “iconic day” for the Italian American community, it does bring issues for others.

“If there are statues, symbols that are offensive to folks, we have to have a reckoning with that,” he said.

Murphy said he was hopeful that municipalities would be able to find a solution.

“Can we find a way to both celebrate Italian American heritage on one hand, but also remove symbols that offend people?” he said.

Murphy also was asked about his desk — which was used by former President Woodrow Wilson, who also served as governor of New Jersey (and the president of Princeton University).

Wilson is nearly unanimously acknowledged to have been a racist. On Sunday, Monmouth University announced it was removing Wilson’s name from a building on campus.

Murphy joked that the desk is the only one he has, but then turned serious on the matter.

“It’s the only desk I’ve got, but that’s something that I will have to deal with,” he said. “There’s no question about that; I don’t have an alternative at the moment, but I respect what’s going on elsewhere.”

Murphy says schools will get chance for extended cleaning — and...

Numbers back up Christie’s success with Camden