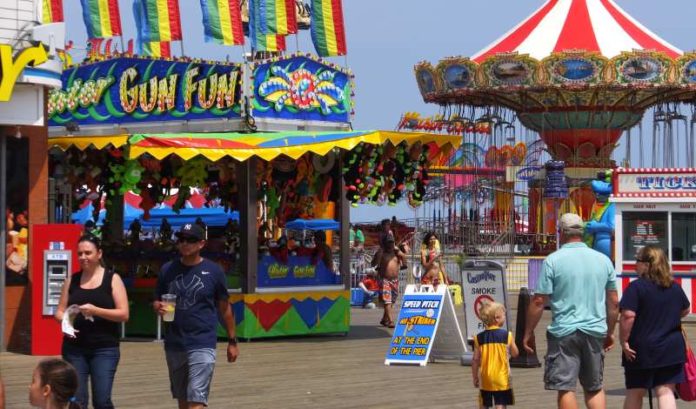 Gov. Phil Murphy said he was happy to announce Tuesday that the state was opening water parks and amusements — including those on boardwalks — in time for the Fourth of July weekend. But the announcement came with a warning from Murphy and Health Commissioner Judith Persichilli: Young people can get COVID-19, too.

Persichilli announced there are growing numbers in the age group, saying it represents 22% of the new cases thus far in June — a big increase from the 12% impact it had in April. She noted you can attribute some of the increase to a rise in testing, but the increase in this age group has been consistent throughout the country.

And, while COVID-19 has predominately impacted the older age groups, Persichilli said more than 640 people aged 18-29 have been hospitalized thus far — and more than 50 of that group have died.

Murphy summed it up this way: “No one is invincible.”

How you prevent the spread with more openings will be difficult.

Murphy noted the standard requirements will be in place — face coverings and social distancing — and noted such parks will be limited to 50% capacity. But, he noted common sense is the biggest key.

“With next week’s July Fourth holiday weekend rapidly approaching, and with families looking for ways to enjoy their time off together, we wanted to make it known that, yes, the rides will be in operation,” he said. “But, moreover, we want everyone to enjoy their time together responsibly.”

Playgrounds also will open July 2. And Murphy hinted there is the potential that some indoor arcades may be opened, promising more on that later in the week.

Of course, none of that will matter if common sense doesn’t occur. Persichilli and Murphy both said the state is seeing too much disregard among the younger age groups — which too often have been seen too close together.

Murphy liked the idea of people having holiday parties taking the contact information of everything in attendance — but, again, said common sense is the best defense.

“Let me reiterate,” he said. “There is no vaccine for COVID-19, there is no cure and there is no proven therapy. We hope to have all of those things at some point, but we have none of them now.

“The only thing that works is to not get it. This is why, across our restart, we are starting with steps tailor-made to ensure social distancing.”

Murphy said social distancing is the main reason the state has flattened the curve. He points to that — and to face coverings going forward. Nice weather, he said, is no reason for a letup.

“I know the last thing anyone wants is a ‘face-covering tan,’” he said. “I know many people think that, just because the weather is hot, they can’t catch the coronavirus that causes COVID-19. And, I know many young people think this virus isn’t after them. In every case, you are wrong.”