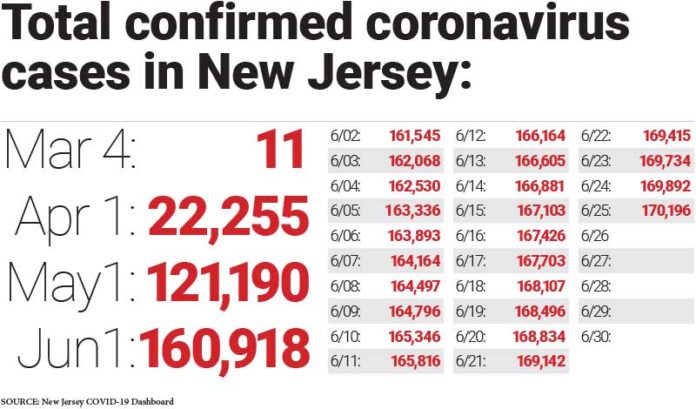 Murphy, during his daily briefing Thursday, announced 26 more official fatalities, bringing the state’s total to 13,018. Then, he said the state was adding an additional 1,854 probable deaths due to COVID, bringing the total to 14,872.

Most of the additional deaths came upon a review of all deaths — and added those who are presumed to have died from COVID-19 but never officially were given a test.

Murphy said Dr. Ed Lifshitz, the Communicable Disease Service medical director at the Department of Health, and his team examined thousands of death certificates to identify residents whose passing could, with great reliability, be attributed to COVID-19.

“We know that there are those upon whom a COVID-19 test was never performed, even though the underlying symptoms and causes of death point to the probability that they did, in fact, have COVID-19,” Murphy said.

Murphy also said he doesn’t expect the number of probable deaths to rise significantly moving forward, due to the state’s current testing protocols and decreasing number of deaths overall. 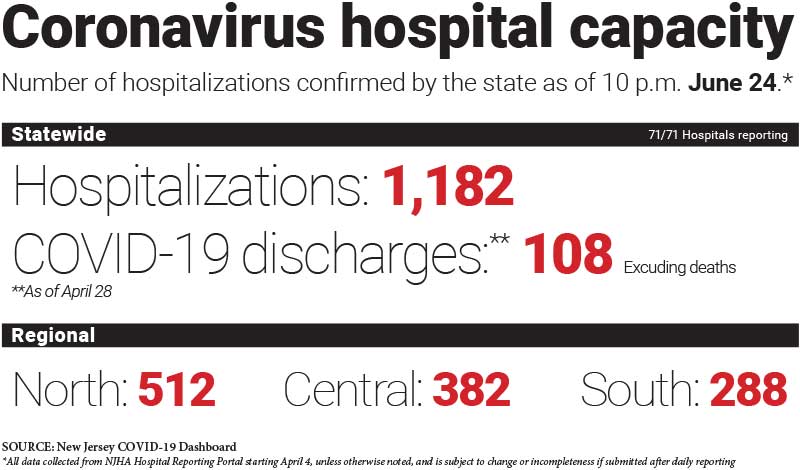 Murphy announced there were 406 additional cases, raising the state total to 170,196. By comparison, both Florida and Texas reported more than 5,500 cases Wednesday.

Hospital metrics, as of 10 p.m. Wednesday:

Murphy promised the state would have guidance for schools for the fall during the briefing Friday.

He gave no timetable for when guidance would be out for indoor dining and casinos — which he announced earlier this week that they would resume July 2.

“it’s inside, it’s sedentary — there are proximity and ventilation issues,” Murphy said. “It’s all the things that we’ve been talking about. “

On the potential early medical release of Diana Hoffman, whose false police report led to the death of State Trooper Marc Castellano 10 years ago. The normally mild-mannered, affable and exceedingly polite Murphy was anything but:

I’ll speak as a citizen as well, in part, as governor. I have no sympathy for Ms. Hoffman. She committed a heinous crime. That trooper — and I signed a law in his name and in his memory — and he lost his life because of her. So, I have zero sympathy.”

Cooper to announce $2B expansion in Camden today