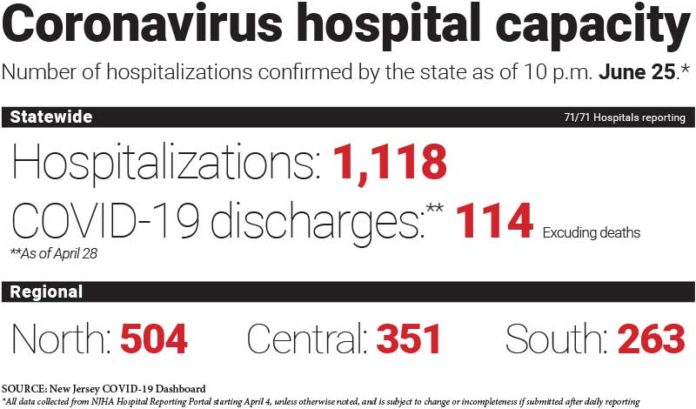 Health officials continually warn that you shouldn’t read too much into one-day statistics — but you have to think New Jersey officials felt a little better about the day-by-day numbers Friday, when the announced metrics were all down from the day before, reversing a weeklong rising trend.

The rate of transmission dropped to 0.86 (anything under 1.0 is good) — meaning each case spawns fewer than one new case. That number had been rising all week. It was 0.76 Monday.

The announced positivity rate dropped from 3.65% Thursday to 2.1% Friday. Today’s number is below the 2.42% rate announced Monday and only the second single-day drop of the week.

The numbers are still small — and still put New Jersey ahead of much of the rest of the country, which is experiencing some of what we had in March and April. But, still, seeing a drop was worth noting.

Here are the rest of the numbers:

Murphy also announced there were 44 additional fatalities, pushing the state total to 13,060 — which does not include the more than 1,800 deaths that likely were caused by COVID-19.

Murphy said the 59 people with COVID-19 were admitted to hospitals, while 114 were discharged.