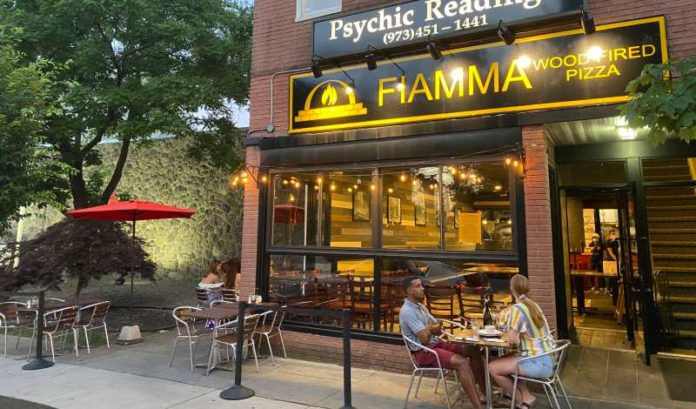 Charlie Magjuni, the co-owner of Fiamma, admits that he’s fortunate.

The three wood-fire pizza restaurants he owns in North Jersey with a business partner already did 30% of the total business before COVID-19. Now, with some outdoor seating and increased takeout, he figures he’s up to 50% on a good week.

Magjuni said he was looking forward to adding indoor dining — especially with the holiday weekend coming up. But, he said he’s respectful of Gov. Phil Murphy’s decision to put that on pause. Anything, he said, other then going backward would be fine.

“When we heard it today, we were upset,” he said. “But, at the same time, we don’t want to go back to the way it was in March, either, when everything was locked down and we couldn’t do any business.”

Magjuni feels he can get by for now. But he knows many of his restaurant friends cannot.

Marilou Halvorsen, the head of the New Jersey Restaurant & Hospitality Association, said Monday’s decision was a double hit for the industry: Not only can restaurants not open indoor dining — many, she said, have lost thousands of dollars they spent getting ready to reopen.

Especially those who had not been able to do takeout or outdoor seating.

“We have members who have spent thousands of dollars cleaning and buying food,” she said. “Now, all that food is going to go to waste. It’s going to have be donated. This is going to be the nail in the coffin for many members.”

Halvorsen had two main complaints about the reversal.

The first was the timing.

“How can you announce this two days before?” she said. “At least do it a week before. At this point, it would have been better if he didn’t say we could open at all.”

Then there’s the issue of establishments not following the rules — not enforcing social distancing, not pushing more face coverings — as being a cause for the pause.

Halvorsen said the governor should start by going after them — something she’s fully supportive of.

“Why don’t we start with the enforcement of the bad apples,” she said. “We support that. We want people operating safety and in accordance with the executive order. Let’s start with a fine or a suspension of your license.

“But you don’t take a sledgehammer to a whole industry.”

Therein lies the issue. Treating all restaurants and bars the same doesn’t make sense — especially in a state that prides itself on having so many mom-and-pop local restaurants. Many of which don’t even have a liquor license. Having a bar at the Shore dictate business for everyone is wrong, Halvorsen said.

As is basing decisions on what is happening in other states, she said.

“We shouldn’t sentence an entire industry because of unprepared states and the bad acts of some bar operators,” she said. “We have said repeatedly that, unlike other business sectors, the restaurant community must meet the highest standards of sanitation. Patrons and employees can expect a safe and healthy experience. We just need support so we can do our job.”

Halvorsen said her members are open to anything. Reduced hours. Reduced liquor sales. Whatever it takes.

“Everyone knows they are going to take it on the chin a bit,” she said. “But we’re willing to work with the governor to find a solution.”

Murphy didn’t seem to indicate he was going to change his mind anytime soon.

“We have enormous sympathy (for restaurant owners), but the alternative here is worse and unacceptable,” he said.

Magjuni, 35, said he’s hopeful that he can wait it out. He said he’s fortunate to be in three communities — Millburn, Westfield and Morristown — that have shown tremendous support.

“People want to help,” he said.

It may be enough to help him hang on. He fears many of his friends in the business won’t be able to.

“I just don’t know how some of them are going to make it,” he said.

Zoetis CEO Peck named one of Fortune’s 20 Businesspersons of the...