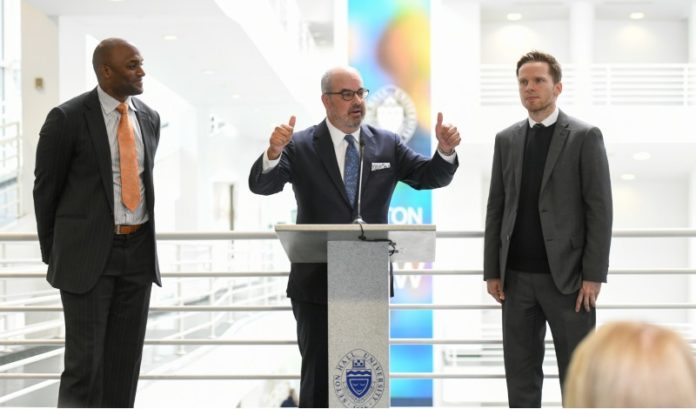 If everything goes as planned, New Jersey is looking at an unprecedented level of sports gambling opportunities in the coming weeks and months, as all major sports are planning to resume play.

New Jersey, which broke Nevada’s stranglehold on legalized professional sports gambling a little over two years ago, should be able to take in record action either through gambling apps or in-person wagering at New Jersey casinos and horse racing tracks, which Gov. Phil Murphy will allow to reopen in time for this Fourth of July weekend.

It’s an opportunity that casual and serious-minded sports bettors can’t wait to indulge.

The gaming industry realizes this, and this year marks a first-time effort by one of its leading players, GVC Holdings, to manage the potential addiction that could come from bored and eager people who might be down on their luck — having suffered through job loss and whatever else as a result of COVID-19.

The Trenton-based GVC Foundation US, led by a group of high-profile trustees including former New York Giants standout wide receiver Amani Toomer, continues to roll out a program that describes and cautions college and professional athletes about the perils of gambling — either from a wagering or participation angle. Later this year, it will move toward creating more resources and tools to help limit the dangers of individual consumers who place bets, such as through being precluded from signing up for gaming apps, software blocking, bank account blocking and dollar limits for wagers.

GVC Holdings, a publicly traded company and one of the one of the world’s largest sports-betting and gaming groups, operating both online and in the retail sector, launched GVC Foundation US in October, the first dedicated U.S. foundation for responsible gaming, corporate compliance and sports integrity.

Additionally, in collaboration with Seton Hall Law School, the group also held in March the first U.S. gaming, integrity and compliance educational program; and, in partnership with the National Council on Problem Gambling, a program helping military veterans with gambling addictions.

“Seton Hall has been phenomenal to work with, a real trailblazer in this,” Martin Lycka, trustee of GVC Foundation US and director of regulatory affairs at GVC Holdings, said.

When sports resume, 22 states and the District of Columbia will be open for business to take legal wagers.

Toomer is concerned about how this can impact college athletic programs — a longstanding concern.

“The first day I sat down for a team meeting as a football player at University of Michigan, they addressed us all about what gambling can do to your career and reputation,” he said. “They said there are many things you can do off the field and receive a second chance, but being involved in gambling was not one of them.”

Toomer is an impassioned faculty member of the GVC Program. In March, the program debuted when he and other experts, supported by research from Harvard University and EPIC Risk Management, a gambling harm minimization consultancy helping to lead the nationwide program, spoke to several Division I programs. (GVC cannot divulge the participating schools.)

“We talked about the integrity of the game,” Toomer said. “We told them how they and the U.S. as a whole can learn from mistakes in the past, whether it was Ohio State quarterback Art Schlichter or recent controversies in European soccer leagues and other sports.”

Schlichter was a No. 4 overall pick in the 1982 NFL Draft, but is better known for his four-decade compulsive gambling habit and the legal problems that arose from it. He is currently serving 10 years in federal prison for stealing millions of dollars in order to fuel his gambling habit.

Toomer says the experts who speak on behalf of GVC at these events have pinpointed that African American male athletes are the most vulnerable to gambling addiction.

“It’s something about where they grew up might have taught them to take risks, and that taking them is OK,” Toomer said. “But, with everything in civil society, there is a safety net. People need to be aware of this when it comes to gambling and gambling addiction. (Those who are vulnerable) need to learn to identify potential problems before they happen. They can do something about it.”

Roseland’s Bill Pascrell III, trustee at GVC Foundation US, partner at Princeton Public Affairs Group and one of the leading experts on online gaming, lottery and sports betting, said gambling is the most perilous addiction.

“It’s greater than cigarettes, alcohol, opioids, you name it,” he said. “To this day, the Federal Drug Administration has not recognized it as a disease. The job of teaching and creating awareness of this problem has largely fallen on philanthropic efforts.”

That has changed with the GVC program, Pascrell said.

“This program is unprecedented in our industry,” Pascrell said. “No other company has made the investment of time and money that we have. Even better, this program is putting pressure on the other gaming companies to play catch-up.”

Lycka said the program’s rollout has been slowed by COVID-19 restrictions. Toomer said offering the education via a Zoom network would not do the powerful presentation justice.

“The goal and focus for the program is about how to stop or limit behavior that is moving toward addiction,” Lycka said. “Gaming is for entertainment purposes. We want to protect those who are vulnerable from the ills gambling can cause.”

Pascrell said Toomer, a devoted supporter of youth sports leagues in New Jersey, is the real “attention-grabber” when he can speak of real experiences from his athletic career.

“If we can get the message to younger athletes before they get to college, then the message will sink in and make even more sense to them then,” Pascrell said.

When speaking to college programs, attending the one- or two-day course is not mandatory, but Toomer has seen great attendance figures.

“When I was growing up, any time you had the chance to listen to a pro athlete talk about anything, you were there, it was so beneficial,” Toomer said. “Those who attend will listen because having a successful athletic career is a dream goal for these young men and they’ll take all the advice they can get.”

The GOAT: David Burke talks about his latest restaurant, located in...

Death of a diner: Overpass project on Rt. 46 has taken...