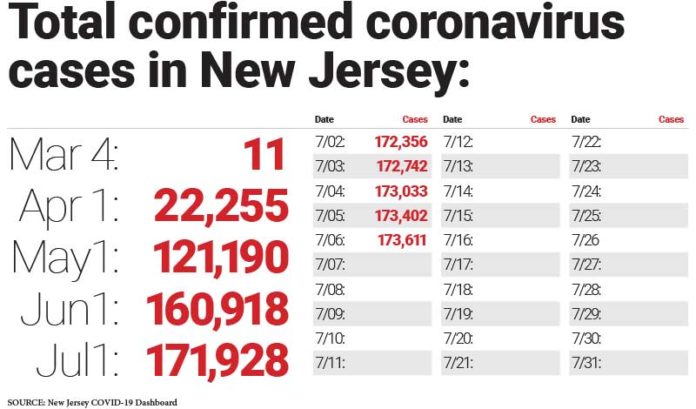 Gov. Phil Murphy isn’t quite sure why the state’s rate of transmission inched about 1.0 for the first time in 10 weeks. It could be related to not enough face coverings — or coming from people who spent time in hot spots around the country.

This much is clear: Any thought of more openings in the state is now on hold. And will be for some time.

“One thing that this leads to me is that we’re not going to be jumping the gun on a whole lot more opening up steps right now,” he said. “We’re at where we’re at now — and my guess is that we’re going to be there for a bit.”

Murphy was speaking at his daily COVID-19 briefing, shortly after announcing the state’s RT — which is the number of new cases each existing case spawns — had been at 1.03 all weekend.

Murphy’s fear is that the RT will jump higher and that New Jersey will join other states that have been seeing huge increases in recent days and weeks.

His comments are bad news for the restaurant industry, which has been pummeled by the virus.

Murphy was set to resume indoor dining July 2, but he put a pause on those plans just three days before the restart date. At the time, he said the state was going to get there — using his often-repeated phrase — “sooner rather than later.”

That no longer appears to be the case.

On Monday, he reiterated his sympathies for the industry, but said he has no choice — especially with hot spots breaking out across the country. Not to mention the rate of transmission edging over 1.0, the statistical spot that indicates cases are on the rise, not the decline.

“In a perfect world, we’re not making decisions with three days to go,” he said. “Last weekend, we were looking with horror as cases began to explode in other states.”

Murphy said there’s no evidence that people going to the beach, the park or protesting peacefully has led to an increase in the rates of transmission. He said it is overwhelmingly an indoor reality.

“I have nothing but sympathy for the small business community generally, and particularly in hospitality, that has been crushed,” he said.

Should you hold Thanksgiving gathering? One doc weighs in

Devils to have (limited number of) fans in the stands starting...