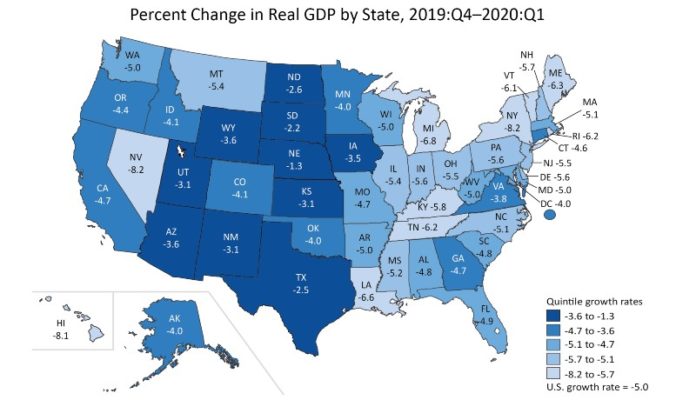 Garden State Initiative on Tuesday analyzed New Jersey’s latest Gross Domestic Product data from the Commerce Department’s Bureau of Economic Analysis and found the economy downturned as COVID-19 picked up throughout the nation.

The state’s GDP, a measure of the aggregate output of all goods and services produced within the state, declined by 5.5% in the first quarter of 2020, GSI said. This ranks New Jersey’s growth at No. 35 out of all 50 states.

GDP also decreased in all 50 states as well as the District of Columbia, the report said. The percentage change in real GDP in the first quarter ranged from -1.3% in Nebraska to -8.2% in New York and Nevada.

“New Jersey’s output in the first quarter was sadly, more or less in line with the nation. Our real GDP fell at a 5.5% annual rate; a bit lower than the national decline of 5%, but quite different than New York’s nation-leading 8.2%. Our performance was a bit softer than the nation’s simply because we shut down earlier than most, so sectors such as real estate (which is largely estimated from sales transactions) and wholesale and retail trade fell more than elsewhere, and unlike some states in the Great Plains there was no support from agriculture. New York was much weaker due to a collapse in finance and construction,” according to Dr. Charles Steindel, former chief economist of the state of New Jersey and current resident scholar, Anisfield School of Business at Ramapo College.

The reduction in New Jersey was near the middle of the pack to its regional neighbors, including Pennsylvania (5.6%), Maryland (5%), Delaware (5.6%) and Connecticut (4.6%).

Here are the Top 5 sectors that have contributed to the decline of real GDP nationally:

NJPP: N.J. economy improves, but not all residents prosper