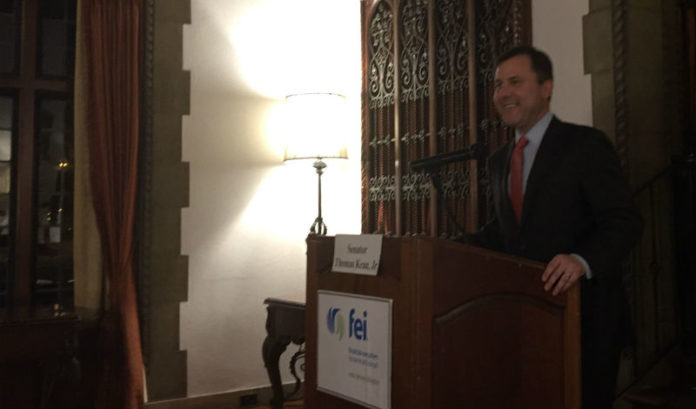 For months, Gov. Phil Murphy has been asking the Legislature to pass a bill allowing him to borrow at least $5 billion to provide more money for the state’s expenses. On Thursday, two Republican party leaders made a counterproposal: Free more of the money the state received in the CARES Act for small businesses.

Senate Minority Leader Tom Kean Jr. (R-Westfield) said Murphy is holding too much of the money to potentially fill budget gaps, rather than give more of it to small business.

“Anytime we’ve been with the governor or anyone in the administration, we’ve been asking every single time: What’s holding back the release of the money?” Kean said.

Kean, who was joined by Assembly Minority Leader Jon Bramnick (R-Westfield) on a webinar co-sponsored by the New Jersey Chamber of Commerce and the New Jersey Business & Industry Association, said he can’t get a good answer.

The state needs to put more money on the street, Kean said.

“Simply holding onto the money until the tail end of the year to try to fill a budget gap is not a responsible use of the money,” he said. “This money should be out … as opposed to being held as a cash reserve for other purposes.”

The Murphy administration did not immediately return a request for comment. But it should be noted that the state’s Economic Development Authority is in the process of distributing $45 million in grants to small businesses — marking the second round of such funding. The first allocated $5 million.

In addition, numerous counties and municipalities have set up grant programs for small business, the latest being Jersey City, which announced plans for $7 million in grants on Thursday.

“Whereas other states released hundreds of millions of dollars to help out their small businesses immediately, the governor horded all that money — and didn’t get the early money, the amount of money that was really going to be necessary and helpful, out to help people in their immediate times of needs.

“We need to have more of that CARES Act money released to the businesses and the nonprofits and others in a meaningful, timely fashion. Because people need those operating dollars in order to continue their businesses.”

Bramnick agreed with Kean, but his biggest complaint is that the governor — and the Legislature — has not spent enough time talking with the business community to understand the issues it is facing.

Bramnick said it’s been a missed opportunity after a good start.

“I’m not going to give the governor a lot of kudos, but I am going to say, at the beginning, taking charge, there was a period of time when I thought his decisions were well-meaning and strong,” he said. “Here’s my problem: If you’re going to make decisions and run the state by executive order, you need to have hearings. You need to hear from restaurant owners, business owners, infectious disease experts. You need people to testify in front of the Legislature. The governor can sit there and listen. But everyone has to have a voice. You can’t come out at 1 p.m. every day and dictate what you think should happen.

Bramnick said it’s a matter of being heard.

“Open up the process,” he said. “Listen to the business owner in Cape May, to the business owner in Sussex County, or in Jersey City. Let them come to the table. This should be eight hours a day of discussion. And then if the governor comes and says, ‘OK, I’m going to continue the executive order and make a decision,’ at least we’ve had an opportunity to be heard.”

Kean, meanwhile, said he doesn’t like some of the things he is hearing in regard to taxes.

“We should not be talking about increase in taxes, increase in spending, we should be focused on responsible government decision-making,” he said.