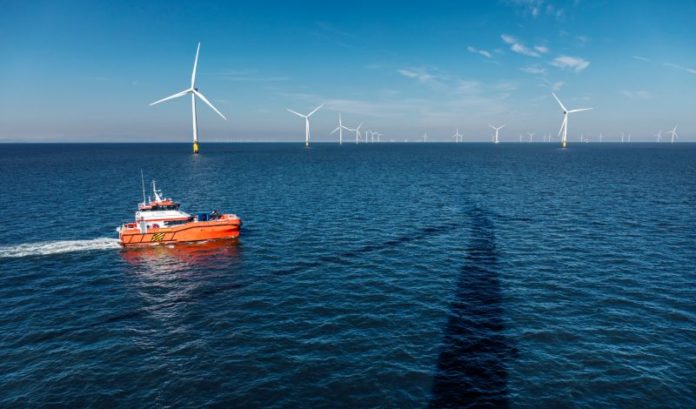 New Jersey’s economic officials hope their plans for a renewable energy windfall will arrive when it’s most needed.

Although the idea of locally growing the offshore wind power sector was floated before the pandemic’s disastrous impact, the state’s attempt to make itself central in the industry’s supply chain with the proposed New Jersey Wind Port has brought the promise of thousands of new jobs and $500 million of new economic activity … at a time when there are few signs of COVID-19 completely blowing over.

State leaders in late June outlined what the plan was for this around 200-acre seaport in Lower Alloways Creek Township; it’s a multiphase project that will ultimately allow for staging, assembly and manufacturing of components used for offshore wind projects. The New Jersey Economic Development Authority has spearheaded the project on behalf of the state.

Brian Sabina, the agency’s senior vice president of economic transformation, said that, as COVID-19 carries the risk of long-lasting job insecurity, there’s an important data point to look at: Near the top of the list of fastest-growing jobs is still the profession of wind turbine technician.

“And, what we believe we’re seeing in that data is the potential for clean energy jobs and green jobs to provide opportunities to those dislocated from previous employment,” he said. “So, accelerating access to those jobs and this clean energy transformation is doubly important.”

The project to develop the port, which is estimated to cost between $300 million and $400 million, is an extension of Gov. Phil Murphy’s vow to bring more offshore wind-generated electricity to the Garden State. Prior to the pandemic, he signed an executive order raising the state’s offshore wind goal from 3,500 megawatts by 2030 to 7,500 MW by 2035.

“Between those two states, which make up more than two-thirds of the U.S. East Coast wind market’s pipeline, you’ll have lots of jobs and economic activity over the years to come,” Sabina said. “And, what the port can do is serve as a hub for those projects, but also those up and down the coast.”

Globally, the offshore wind industry is anticipated to become a $1 trillion industry by 2040, according to a 2019 report from the data and statistics firm International Energy Agency.

“I believe (the Port) will put us in a strong competitive position to capture those investments, but, of course, we are not alone in making commitments to do so,” Sabina said. “Other states are also looking at how to commit public dollars to support this industry, and other states may look to create similar assets to ours.”

As of now, Sabina claims there are only a handful of similar manufacturing bases across the entire Eastern Seaboard, and none built to be dedicated to this purpose. And, of those facilities, he added, “very few have the space to really help the industry grow.”

The proposed seat of the seaport, Salem County, is a struggling area that state leaders say is in dire need of an economic centerpiece such as this. It lies outside of height-restrictive bridges and powerlines, which Sabina explained is a perk because of how wind turbines can be as tall as towering skyscrapers, and often have to be transported vertically.

State leaders have estimated that at least 1,500 jobs will come from serving the wind industry with this project, as well as hundreds during a period of construction that’s set to get underway in 2021.

“COVID-19 has, of course, created uncertainty, but it has not removed the pressure to make this happen by the early 2020s,” Sabina said. “If anything … it’s increased the importance of the construction jobs it will soon bring to the state.”

The timeline of the port’s development is guided in large part by the energy industry’s own timeline for developing the first round of wind projects in the region, Sabina said.

Around this time last year, it was announced that offshore wind developer Ørsted would be installing a massive wind farm 15 miles off the coast of Atlantic City. The project, which is scheduled to be up and running by 2024, will supply enough power for more than 500,000 New Jersey homes. 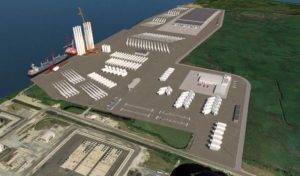 The developer, a Danish company that operates locally as Ørsted U.S. Offshore Wind, welcomes the state’s plan for the port. Additionally, its leaders have been willing to provide input on it, according to Kris Ohleth, senior manager of stakeholder engagement at Ørsted.

“We’ve worked with them on technical details, because we’ve had the opportunity to work in many offshore wind ports in the world,” she said. “They’ve done a great job in doing their homework, reaching out to us and perhaps other developers about what the specs should be and the layout should be, schedule, costs and other information.”

Ohleth said Ørsted is leaving it up to the state’s agencies to spearhead the project and has no formal ties to it.

“But we do hope to be able to be one of the customers of the port,” she said. “We think it will be a great facility. And ports are in short supply right now.”

Offshore wind developers need more of these manufacturing bases locally to help meet the increasing demand for wind projects at the state level. Until last year, there was not only just one wind farm in the country — but few, if any, concrete plans for more.

In New Jersey, wind projects have started to be solicited by the Board of Public Utilities on a set two-year schedule. Ørsted was selected last year after the BPU began this process in 2018 to develop its 1,100 MW wind farm, set to be the largest project in the company’s regional portfolio.

“We expect another solicitation to be released by the state through the BPU later this year,” Ohleth said. “We at Ørsted plan to respond to that solicitation, as we would imagine other companies who are eligible will as well.” 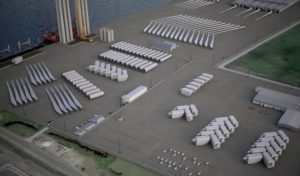 Ørsted is making biggest splash of maybe all offshore wind developers in the U.S., which started with the Rhode Island-based Block Island Wind Farm it operates, the country’s first offshore wind farm.

Its mark can also be found in the earliest history of the industry abroad. One of its predecessor companies launched the world’s first offshore wind farm about 30 years ago, the Vindeby Offshore Wind Farm on the Danish island of Lolland.

Even if Europe has sailed far past the U.S. in wind energy developments, leaders at Ørsted believe the country is on a similar trajectory now, with states like New Jersey pushing for these developments with renewable energy targets in a way that individual European countries have.

In any case, New Jersey’s leaders are glad to be riding the wave.

“There’s actually a benefit to the fact that Europe is at least a decade ahead of us,” Sabina said. “We can take a look at the advancements they’ve made in offshore wind and learn from it.”