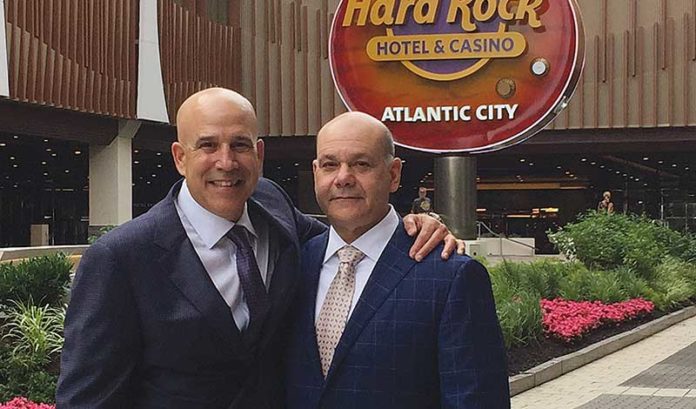 But, for Jingoli, one of the owners of the Hard Rock Hotel & Casino in Atlantic City, it’s not just about occupancy, food and beverage sales and gaming revenue. It’s about jobs.

Jingoli said Hard Rock, which was allowed to reopen to 25% capacity for the Fourth of July weekend, has been able to bring back nearly two-thirds of its staff.

It’s not a money-winner for the casino, but it’s a huge plus for a city that’s hurting.

“What’s most important — overwhelmingly — is that our employees are really grateful to be back at work,” he said. “No matter what type of difficulties they are facing in their own lives, you can walk through our casino and get an overwhelming positive response from the people that are working. I’m so grateful for that.”

Jingoli, of course, is pleased to see the business side is going … as well as it could be.

The 25% capacity — combined with the fact that eating and drinking must be outdoors — means the Hard Rock is nowhere near where it could be or where it was last July.

The greater concern is that the guests who are there are coming away with a positive experience.

Jingoli said slowly, surely and safety is the key to the recovery.

“We’re going to follow the governor’s lead on this, because the worst thing that could happen is that we’d have to shut again. So, I think caution is important. And, what we don’t want to do is get the guests feeling safe and comfortable and returning regularly and have a spike. So, we’re going to keep hammering away.”

That starts with the Clean Team, an army of workers (more jobs) in yellow shirts whose entire job is wiping down and cleaning the facility.

“They’ve become our new ambassadors,” Jingoli said. “They are a big part of our brand right now.”

You see their presence from the time you enter until you leave, he said — as they help monitor the temperature scanning machines that everyone must pass through to enter. The casino has hand-sanitizing stations throughout, too.

Jingoli said the weather and the casino’s property has made outdoor dining easy to manage — and he thanks the city for helping the property use the square footage it needs outside.

And for guests staying overnight, another crew is ready to give them takeout that they can bring to their rooms.

“It’s the new normal,” he said. “We don’t think it’s going to be this forever, but it is what it is now and we’re adjusting to it.”

Jingoli credits Joe Lupo, the president of the casino, for the transformation.

“I’m just unbelievably impressed with Joe Lupo and the whole Hard Rock team,” he said. “What they were able to accomplish with no real playbook is incredible.”

He said Local 54 and the AFL-CIO also deserve credit, too.

“This is industry, organized labor and government working together,” he said. “And, I have to tell you, I’m an industry guy, but I’ll do a plug for organized labor here. It is way easier to do all this stuff when you have an organized workforce.

Of course, none of that matters without the customers.

“We’re getting good bookings,” he said. “We’re allowed to be at 25% of capacity, and I think we’re close to that. People want to get out of the house. And they want to come to a place where they feel safe.”

And so far, Jingoli said, no one has taken issue with any of the safety precautions.

“I compare it to going through a TSA checkpoint before 9/11 and after 9/11,” he said. “People understand.

“And people are being nicer to each other. If that’s something that comes out of this, that wouldn’t be such a bad thing.”

Jingoli said the casinos will learn to adjust. They have to. And it’s something he’s willing to do if it means it can help the city. That’s always been a main goal of Jingoli’s.

Last Thursday, he once again was helping to organize and orchestrate a food program that is sponsored by a coalition of casino and labor groups, CRDA and the Community FoodBank of New Jersey.

“I was there Thursday,” he said. “There were 3,000 families getting 24 nonperishable meal packs and, because we’re the Garden State, there were a lot of local farms that were providing fresh produce.”

Jingoli also was pleased to announce that local leaders, working with state government, were able to start a summer jobs program that has 200 at-risk youth working around the city. It’s an expansion of a program that started last summer — one Jingoli hopes to can become a year-round effort.

“These programs can have real impact,” he said.

Of course, everything in Atlantic City starts with a healthy casino industry. That’s why Jingoli is happy that the Hard Rock is open, even at 25%. He’s not worried about scale just yet.

“This is something you can’t pedal back,” he said. “I think we are all very grateful the governor let us open.

“We want to be the example of how to safely provide a positive experience for our guests. And as the health professionals recommend and allow us to, we’ll open up to whatever extent we’re allowed.”