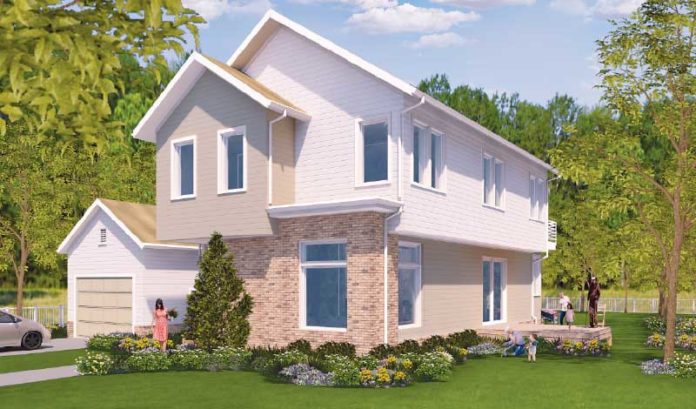 Ed Walters Jr. always has an example of how a passive house works close at hand: the morning’s coffee on his desk, hot well into afternoon hours thanks to his travel mug’s vacuum seal.

Passive homes might be a new concept in homebuilding, he said … but it’s no closer to rocket science than his still-steaming pick-me-up.

It’s just that this approach to designing eco-friendly residences — something he’s doing at his namesake design, build and architectural firm, Walters — hasn’t been utilized enough in the Garden State to win recognition as a model for how easy it might be for homes to require less energy.

The Barnegat-based builder is hoping to change that.

In the township where its headquarters are, Walters is putting the finishing touches on a one-of-a-kind single-family home. It will be one of only a handful of certified passive houses in the state, and the only New Jersey residence of its sort to possibly receive the highest certification from Leadership in Energy and Environmental Design, or LEED — and other certifications as well.

Walters Jr. believes it’s set to be a strong example of how builders can reduce carbon emissions in an otherwise nondescript suburban home. It could perhaps pave the way for more of the passive house technique locally, which involves — like the business owner’s coffee tumbler — totally sealing and insulating a home to keep temperatures stable without the use of heating or cooling.

Making it a replicable model has required a lot of detailing every step of the project as well as ensuring the construction contractors, the Realtors and everyone else knows what they’re dealing with. That’s an issue when there are no existing examples of how to build and sell a home that’s up to the same standards in the state.

“Everyone involved has been getting in-depth education about what it takes to build a house at this higher level,” Walters Jr. said. “It’s a lot of trial and error. The first time you do something, the learning curve is huge. But, once a lot of these building methods and techniques becomes a standard part of how you build things, it’s no longer that difficult.”

The 2,000-square-foot, four-bedroom, two-and-a-half-bath home — despite the airtight barrier it’s built with — was designed to look just like the Barnegat homes surrounding it. It’s being designed and built in partnership with a Philadelphia-based building and consulting firm Idea Broker.

“It’s a fairly regular house — not a mansion,” said Tiffany Rolfing, a principal at Idea Broker. “So, it’s a good test case to see you can have these features in a home without it being in the millions.”

New Jersey doesn’t have in place as many incentives as it once did for buildings built up to the high energy standards this one is expected to achieve, Rolfing added. But other states in the Northeast, such as Maine and Massachusetts, have created state incentives to encourage these green buildings.

“We’re hoping to go back to a higher level of incentives, because it’s working in other states,” she said. “And with the push in the state to be carbon-neutral, we thought this was a great way to be part of the start of that movement. Building a house that combines the passive house goal with these LEED standards is a good test case for everyone to see that it can be done.”

Passive houses, which follow a set of international design principles that have been outlined to promote the reduction of greenhouse gas emissions, are a more familiar concept the farther north you go. In Canada, cities such as Vancouver are almost entirely sticking to this approach for new residences.

But a limiting factor is that the cost to make these ultraefficient homes is still higher than normal homes, perhaps 10%, depending on the area.

Walters Jr. argues that with the home they’re working on, which includes a solar system, utility bills will be nonexistent. When completed, the house will generate the same amount of energy that it will use annually.

“You’re paying $40,000 more for the home, but utility bills can amount to maybe $170 a month — and that’s about the amount more you’d be paying on a mortgage for it,” he said. “So, what has to happen is mortgage companies have to be willing to lend a little bit extra because people will be able to afford more in terms of that additional mortgage payment without the utility costs.”

This is what local builders hope will convince potential buyers of the home, once it is completed.

They believe they’ll be among the first to give homebuyers something they didn’t even know they wanted.

“People weren’t clamoring for the Prius before it was built, but Toyota did it anyways and it became a hugely successful vehicle,” Walters Jr. said. “I think that, once people start to think about how comfortable it would be to live in these homes — especially at a time when people are thinking about what they can do, how they can help the environment — and you show people it can be done, it’s at that point people will start requesting it.”